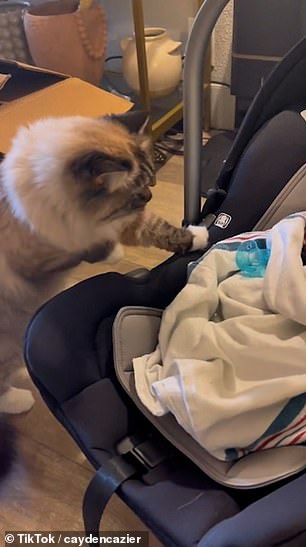 Sibling rivalry is a tale as old as time and something that almost everyone with a brother or sister can relate to – but there’s also a risk it can affect pets and their new human ‘siblings’.

One cat in the US has certainly made her feelings about the new baby girl in the house known after she appeared to get a little bit queasy during his first meeting with her.

Fefe, a well-groomed, long-haired domestic cat from Utah, was filmed meeting her owners’ newborn daughter Maeve as they brought her home from the hospital – and the encounter was enough to make her vomit.

A TikTok video of the first meeting has gone viral on the platform after it was posted by her owner Cayden Cazier and now has more than 23 million views as social media users are left in hysterics at the spoilt cat’s less-than-enthusiastic greeting for her new human housemate.

At the beginning of the video, which is Cayden’s first post on the platform, an automated voiceover says: ‘We were so excited to introduce our newborn to our cat.’

As the voiceover speaks, Fefe is filmed having a sniff of her new baby ‘sister’ in the carry cot. 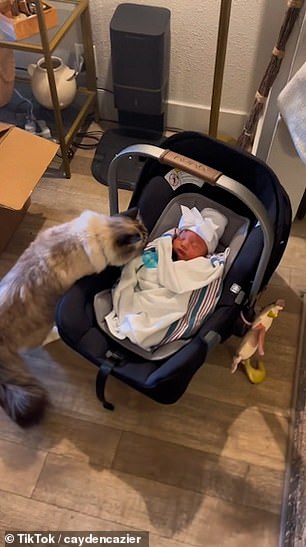 A cat from Utah has gone viral after she met her new ‘sibling’, baby Maeve. Fefe, who is ownedf by Cayden and Katie Cazier, was less than impressed after investigating the newborn on their first ever meeting – and had a physical reaction

While little Maeve sleeps peacefully wearing her hospital blanket and a white headband, Fefe investigates the new arrival, catching her scent by sniffing her all over and taking time to figure her out.

When Fefe decides she has seen quite enough, she steps down from the carry cot and turns away as the camera stays on her.

As the camera stays on Fefe, who breaks into a fast trot as she heads into the next room, her owner Cayden, who knows his feline all too well, predicts what’s about to happen.

He says: ‘Are you kidding me? She’s about to throw up.’

His wife Katie responds in disbelief: ‘No she’s not!’ before Cayden insists, ‘she is.’

As Cayden follows Fefe into the next room, he turns on the light as the disgruntled cat looks up at him and meets his gaze. 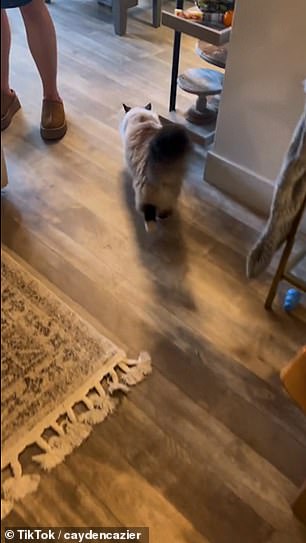 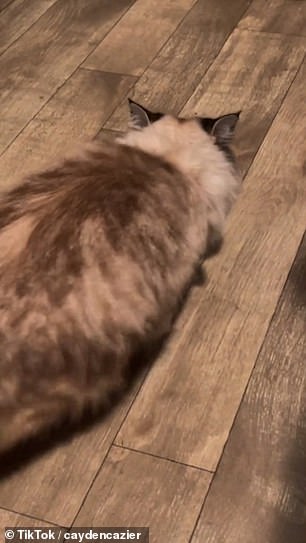 As Fefe turns away in disgust, her owner Cayden follows her through the house, knowing what is about to come

Then, after a feeble meow, she settles down and begins to convulse as Cayden’s prediction comes true.

Viewers can hear Cayden say: ‘Are you freaking kidding me? Really?’ as he zooms in on the cat.

TikTok users were quick to comment on the video which had left them in hysterics, trying to decipher what poor Fefe was thinking.

One viewer guessed: ‘I don’t want it…makes me sick. Return it now.’

Another jumped to Fefe’s defence and said: ‘To be fair she tried to be nice about it and leave the room but she even looked back like oh you really want to see this happen?’

One user sympathised with the feline and shared: ‘I had the same reaction to my siblings v understandable.’

As the clip has gone viral, people have been left in anticipation to find out how the relationship between Fefe and Maeve has progressed.

Luckily for viewers, Cayden posted a follow-up video with an update.

The clips show Fefe keeping a watchful eye over Maeve and continuing to walk over to the carry case to investigate her.

Cayden wrote: ‘Fefe’s motherly instincts might be starting to kick in.

‘We constantly find her watching Maeve, and she seems to be getting more and more comfortable being around her as the days go by. So far no more puke.’