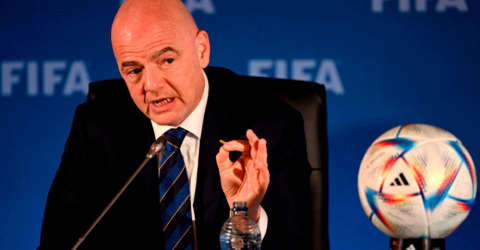 BALI (Indonesia): Football is much more than a sport, and has a “unique magic” power to bring people together, said FIFA President Gianni Infantino in an exclusive interview with Xinhua ahead of the 2022 FIFA World Cup.

While attending the ongoing G20 Summit held in Bali, Indonesia, Infantino called on world leaders to set aside tensions and conflicts, and enjoy the quadrennial football event which is scheduled to take place from Nov 20 to Dec 18 in Qatar.

“The World Cup should be an occasion for joy and unity. It should send a message of hope,“ Infantino told Xinhua.

Infantino said football is also an important economic activity with a global GDP of hundreds of billions of US dollars, creating millions of jobs and bolstering economic growth. “This is about growth, economic growth,“ said the FIFA head.

Infantino expected the FIFA World Cup in Qatar to be viewed by five billion people, more than half of the world’s population.

Noting China’s plan to bid to host the FIFA Women’s World Cup in 2031, Infantino said that the move, together with China’s involvement in football clubs and youth football, helps address regional imbalances in football development, and is crucial for the overall development of the sport.

“China has to be a key part of growth of football. Bidding for important events has to be an element that makes football grow even more in China, women’s or men’s football,“ he said.

He said that FIFA has been discussing how to implement a footballing culture in China, with the hope of making young boys and girls dream of becoming football players, and teaching them team spirit and respect for each other.

“Football touches the emotions of people. It is about passion and inclusion,“ Infantino said.

“When you give a ball to a girl or to a boy, or even to a person who is a bit older, he or she starts to smile,“ he said.-Bernama