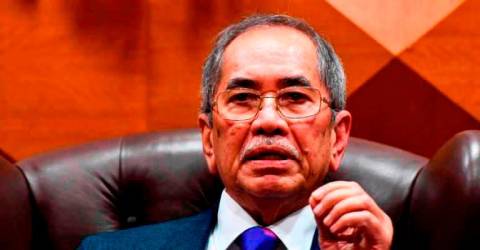 KUALA LUMPUR: The final report of the Special Task Force reviewing laws relating to the sovereignty of Pulau Batu Puteh, Middle Rocks and South Ledge is expected to be presented to the Cabinet next month, in accordance with the decision of the Cabinet on Oct 29 last year.

He said the handing-over of the report was also witnessed by senior officers of the relevant ministries and departments, among them the Ministry of Foreign Affairs, Ministry of Environment and Water, Attorney-General’s Department and National Security Council.

“The final report is one that is independent, based on the views and opinions of experts as a result of the analysis, research and observation by the Special Task Force throughout almost the nine months of implementation from Nov 9, 2021 to Aug 30, 2022.

“Recommendations of the government’s best options regarding the direction in connection with the case, as explained through this special report, come following the government’s decision not to proceed with the Application for Revision and Request for Interpretation at the International Court of Justice (ICJ) in The Hague, Netherlands in 2018 against the judgment of the ICJ in 2008,” he said in a statement today.

Wan Junaidi said the implementation of the Special Task Force was the government’s commitment to ensure the country’s sovereignty is always guaranteed and a priority.

“In continuation of this, the recommendations of the Special Task Force will be scrutinised in depth and in detail from all aspects so that any follow-up action by the Government regarding this issue would have a positive impact on the country,” he said.

Earlier, he said the final report had been presented to the Monitoring Committee, which he chaired, after it was finalised on Aug 22.-Bernama