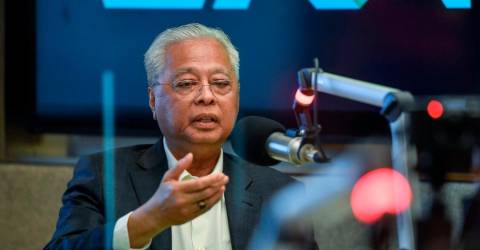 PUTRAJAYA: Prime Minister Datuk Seri Ismail Sabri Yaakob is ready to consider tabling the Budget 2023 if it is permitted by the constitution and the law.

However, Ismail Sabri said he would wait for the advice of Attorney-General Tan Sri Idrus Harun regarding the matter, adding that he cannot do it if it is against the law.

“I don’t know yet. For now, it is still Finance Minister (Tengku Datuk Seri Zafrul Tengku Abdul Aziz) who will table the Budget.

“We have to look at it from the constitution and legal perspectives. If it is not permitted, I cannot do it. (But) if it is permitted, then it can be considered,” he told reporters after the 18th Civil Service Premier Message Gathering (MAPPA XVIII) here.

A day before, Minister in the Prime Minister’s Department (Parliament and Law) Datuk Seri Dr Wan Junaidi Tuanku Jaafar said that the tabling of the Supply (Budget) Bill 2023 in the Dewan Rakyat had been brought forward to Oct 7, during the Third Meeting of the Fifth Session of the 14th Parliament.

In another development, Ismail Sabri said the Umno Supreme Council meeting last Saturday was held in a cordial atmosphere, and there were no issues.

“Sometimes, what outsiders see is different from what is happening inside,” he said when asked whether he was pressured to give up his vice-president post.

He said differences of opinion are normal and should be celebrated. – Bernama