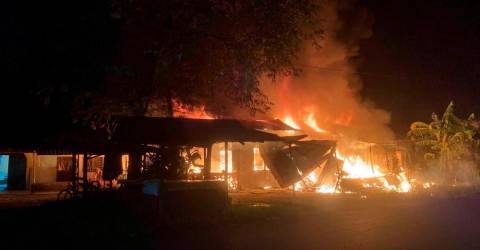 “Upon arriving at the scene, we found that the blaze had destroyed two houses while another house was about 30 per cent damaged,” he said in a statement today.

Mohd Shokri said personnel from the Padang Besar fire and rescue station managed to put out the fire at 9.41 pm.

He said a relief centre was opened at Dewan Felcra Lubuk Sireh at 10.30 pm last night to accommodate the victims.

Mohd Shokri said following the incident, a man was admitted to the Tuanku Fauziah Hospital (HTF) in Kangar after suffering from breathing difficulty, but he was reported to be in stable condition.

He said the cause of fire and amount of losses are still under investigation.