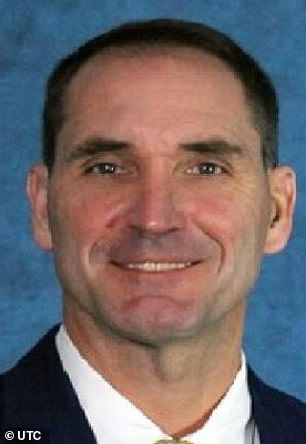 A former football coach is suing the University of Tennessee-Chattanooga, claiming athletic officials violated his First Amendment rights when they fired him over a derogatory tweet in January.

‘Congratulations to the state of GA and Fat Albert @StaceyAbrams because you have truly shown America the true works of cheating in an election, again!!!,’ the tweet read.

‘Enjoy the buffet Big Girl! You earned it!!! Hope the money was good, still not governor.’

Malone deleted the tweet amid a furious backlash and accusations of racism. But two days after it was first posted, the school forced him to resign, calling ‘the entire post appalling.’ 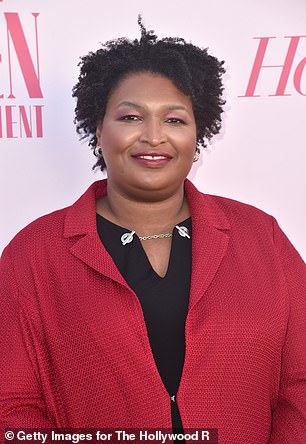 Former University of Tennessee-Chattanooga offensive line coach Chris Malone, left, was removed from his position in January, after he made fun of former Georgia gubernatorial candidate Stacey Abrams’, right, weight and accused of her election fraud 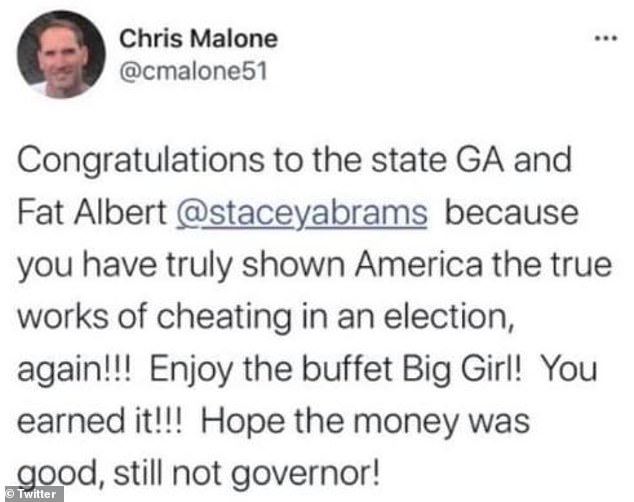 Malone wrote the tweet while Georgia’s Senate run-off election results were coming in on January 5,but quickly deleted it after former players reacted negatively to it

Now the former coach is suing the university for allegedly violating his First Amendment rights.

‘As a public school, it cannot control what its employees say at social gatherings or on social media,’ his attorney Doug Churdar said in a statement when he filed the lawsuit in federal court on Tuesday.

‘It certainly cannot fire them for criticizing and mocking politicians,’ which Churdar called a ‘proud American tradition.’

‘Nobody’s got a problem with it until it’s their politician,’ he noted. ‘And fat jokes may be unkind, but they aren’t uncommon. Just ask Chris Christie and Donald Trump.’

While Abrams run as governor was unsuccessful, her efforts encouraging Georgians to register and turn out to the polls in the 2020 election have been widely credited with helping Joe Biden win the state and flip the two Senate seats. There has been no evidence of election fraud.

Malone shared the tweet as the run-off election results were being tallied on television on January 5, the suit claims, and shortly after he tweeted it, three of his former players responded negatively to it, at which point Malone deleted the tweet and went to bed.

He then went to work as usual and at around 4:30 p.m., he received his first of three phone calls about the tweet from head coach Rusty Wright.

In his third call, Malone states, Wright informed him he was trying to get Malone suspended without pay but was not sure that would happen, the lawsuit alleges.

The next morning, the lawsuit says, he received another call from Wright saying he would be fired if he did not resign.

But forced resignation is legally considered termination, Churdar argues in the lawsuit, which leads with a quote about free speech from comedian Ricky Gervais.

‘Bottom line, Malone tweeted as a private citizen about a matter of public concern,’ Churdar writes in the lawsuit, saying he did not need the school’s athletic director, chancellor’s or head coach’s permission post a tweet from his personal Twitter account. 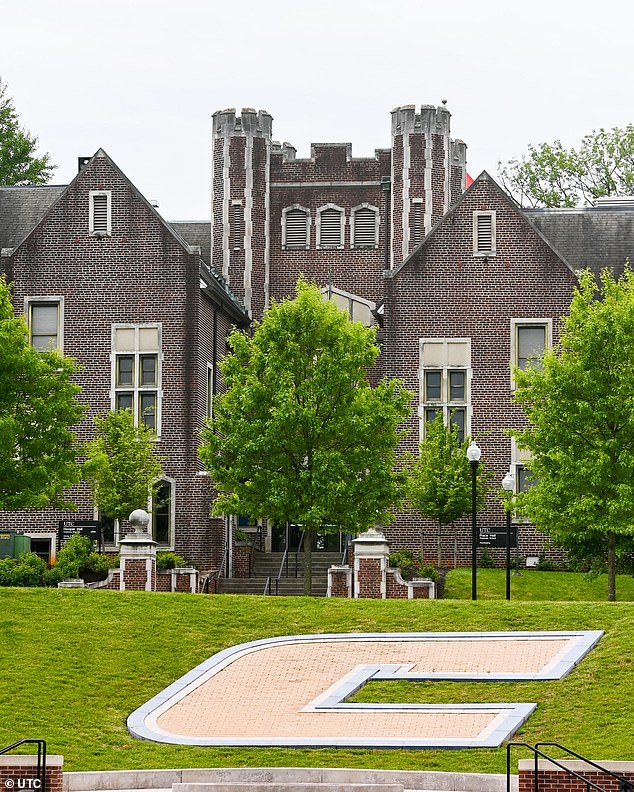 Malone is now suing officials at the University of Tennessee-Chattanooga (pictured), claiming they violated his First Amendment rights by removing him from his position

School officials tweeted on January 7 that they had removed Malone from his position as offensive line coach.

In a statement at the time, Mark Wharton, Chattanooga’s director of athletics called ‘the entire post appalling,’ and Wright wrote that the tweet violated the football program’s standards.

‘These standards include respecting others. It is a message our players hear daily. It is a standard I will not waiver on,’ Wright said. ‘What was posted on social media by a member of my staff is unacceptable and not any part of what I stand for or what Chattanooga football stands for.’

‘Life is bigger than football,’ he continued, ‘and as leaders of young men, we have to set that example.’

He is now seeking reinstatement at the school with back pay, the cost of attorneys fees and other expenses in his lawsuit.

‘There’s no way a man should lose a 20-year career over a tweet that was up for 30 minutes,’ Churdar said. ‘Most victims of cancel culture just walk away. Chris Malone won’t walk away.’