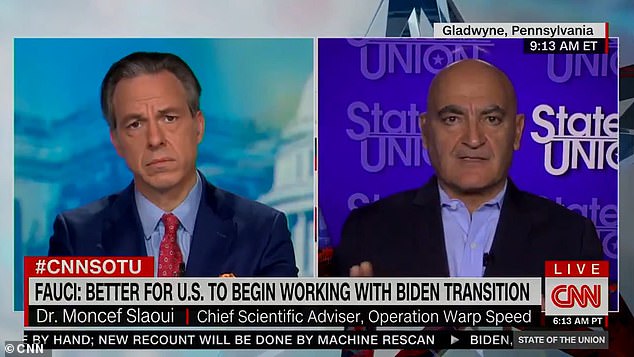 COVID-19 vaccine program head Dr. Moncef Slaoui said the first Americans to receive a coronavirus vaccine could get it as soon as December 11.

‘Our plan is to be able to ship vaccines to the immunization sites within 24 hours from the approval, so I expect maybe on day two after approval on the 11th or the 12th of December,’ he said on ‘State of the Union’ with Jake Tapper.

Pfizer submitted an emergency use authorization application to the Food and Drug Administration and a committee there is set to meet on December 10.

Slaoui pinpointed December 11 or December 12 as the first dates vaccines would be available.

Slaoui, who is leading the Trump administration’s Operation Warp Speed, also said he believed life in the U.S. could get back to normal in May.

Operation Warp Speed head Dr. Moncef Slaoui (right) spoke to CNN’s Jake Tapper and said he believed on December 11 or 12 the first Americans could get vaccinated – and life could get back to normal by May 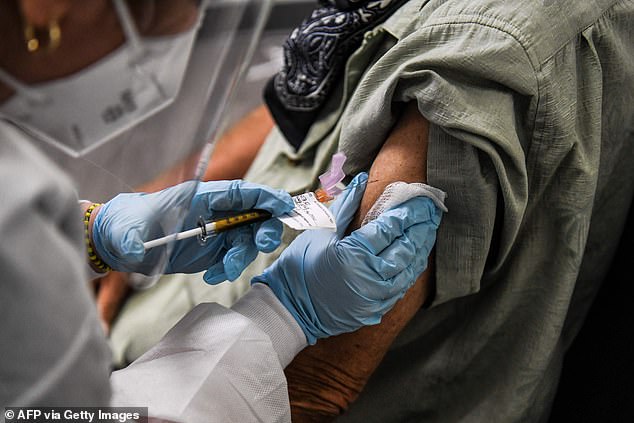 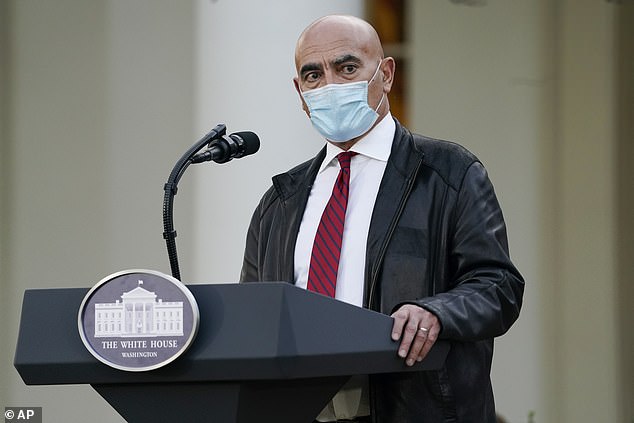 Slaoui, the chief adviser to Operation Warp Speed, is photographed talking in the White House Rose Garden on November 13. He said Sunday that while it would be helpful to talk to the incoming Biden administration, he promised the effort isolated from politics 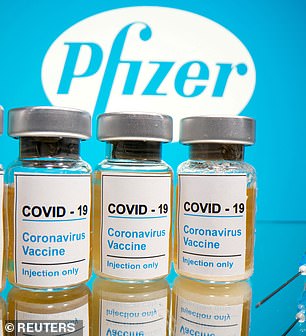 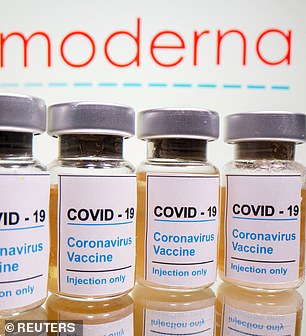 Both Pfizer (left) and Moderna (right) have promising COVID-19 candidates. Pfizer has requested an emergency use authorization from the Food and Drug Administration, which is meeting on December 10. Slaoui estimated the first vaccines could be given out in the U.S. on December 11 or 12

Tapper had asked how many Americans needed to be vaccinated for that to happen.

Slaoui said with the efficacy shown by the vaccine candidates about ’70 per cent or so of the population being immunized would allow for true herd immunity to take place.’

The plan is to have 20 million Americans vaccinated in December and 30 million per month in the months following.

‘That is likely to happen in the month of May or something like that, based on our plans,’ he continued.

‘I really hope and look forward to seeing that the level of negative perception of the vaccine decreases and people’s acceptance increases. That is going to be critical to help us,’ Slaoui added. ‘Most people need to be immunized before we can go back to a normal life.’

Pfizer and also Moderna have promising vaccine candidates and Moderna is also expected to ask the FDA for an emergency use authorization in the coming weeks.

Slaoui indicated he agreed with Dr. Anthony Fauci, the nation’s top infectious disease expert, who has said he’d like to be able to speak with officials on President-elect Joe Biden’s transition team to ensure a smooth hand-off.

President Donald Trump has, so far, refused to concede the election to Biden, thus preventing the transition from getting started.

‘Of course. Smoothness is what we all aim for,’ Slaoui told Tapper.

Slaoui assured the CNN host, however, that the Operation Warp Speed team has tried to stay away from politics.

He made similar statements to NBC’s Chuck Todd on ‘Meet the Press’ Sunday.

‘So, frankly the operation is – has been isolated from, from the administration, from the political environment and the political context. We worked very hard to make sure that’s the case,’ he told Todd.

‘And therefore, all decisions are made, the train is running, whether one administration or the other doesn’t, frankly, make a difference,’ Slaoui continued. ‘I hope there is no disruption in any way.’

Slaoui also said he’d be ‘very happy to’ work with the new administration.

He’s been doing the work on a volunteer basis.