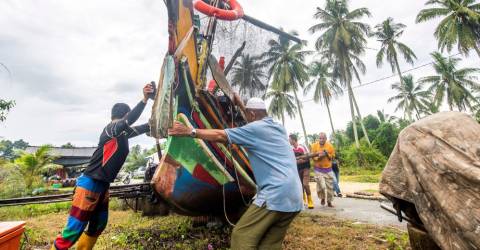 KOTA BHARU: Traditional fishermen in Kampung Pulau Gajah, Sabak in Pengkalan Chepa here, have begun making preparations, including bringing up their boats to shore, with the arrival of the Northeast Monsoon when fishing activities are no longer safe due to the rough seas.

This Bernama reporter who went to the fishing village today found some 40 fishermen got together in a “gotong royong” to bring their boats up to land to avoid them being damaged due to the strong currents and waves.

According to the head of the Pulau Gajah Fishing Community, Nik Ruzulaili Nik Yusoff said it would be dangerous to go out to sea during the monsoon because of the bad weather.

“But, the boats cannot be left at the beach because the strong waves can damage them. So, the boats have to be pulled to the shore, which we do manually by dragging them,” he said, adding that they had pulled up nine boats today. There are about 40 boats owned by the fishermen in the village.

“We all agreed to bring the boats ashore because we cannot go to sea as the unpredictable weather is not safe for us,” he said when met by reporters here today

Nik Ruzulaili said they had a special technique to pull up the boats to shore.

“Round pieces of wood are first placed under the boat, which is then pulled or dragged manually by us using a rope tied to it (boat),” he said, adding that the round pieces of wood help the boat to move smoothly as it is pulled by the fishermen.

He said the process of pulling the boat is normally done one as early as 7 am to take advantage of the morning tide.

“Otherwise, when the water has receded, it will be a task to pull up the boat to the shore,” he added.

He said the monsoon season is the time fishermen will take a break from the sea and look for other jobs, including as construction workers, for income.

As for fisherman Mohd Rizuwan Ramli, 40, he spent his time during the monsoon to repair fishing boats.

The fishermen would return to the sea again in February. — Bernama