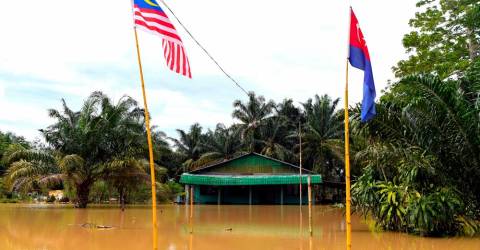 In a statement today, it added the first relief centre was opened at SK Melayu Raya to accommodate 19 evacuees from four families, and the three villages affected so far are Kampung Seri Segambut, Kampung Jasa Sepakat and Kampung Bukit Panjang.

“Continuous heavy rain from 5.30 am caused several houses in Pontian to be flooded,” it said.

In the same statement, JPBD Mersing stated that a relief centre at Penghulu Mukim Complex was opened at 7.30 pm yesterday to house 31 fire victims from two families.

According to the statement, a fire destroyed two houses in Kampung Gajah Mati, Gersik.

Meanwhile, Mersing Fire and Rescue Station Operations commander Assistant Fire Superintendent, Mohd Alias Hussin said one house was 95 per cent destroyed while the other was 60 per cent razed in the fire.

In a separate statement, he added 13 firefighters were rushed to the scene after receiving an emergency call at 4.53 pm yesterday

Mohd Alias said the fire-fighting operation ended at 7.39 pm and the cause of the fire was still under investigation. — Bernama