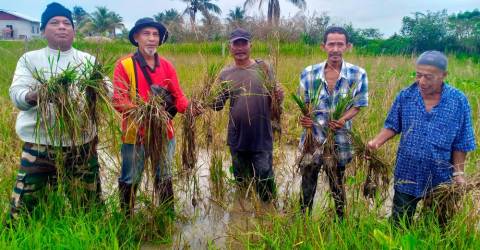 Much of the paddy was grown in the villages of Merkang, Nara and Jelor, and was submerged by chest-high floodwaters for over three days, said A Rahim Yunus, chairman of the Cherang Rotan Area Farmers Organisation (AFO).

“The paddy stalks rotted. It was sad because the crop was ready to be harvested. However, the heavy rains prevented us from doing so,” he told reporters in Kampung Merkang.

He said the destroyed paddy could have fetched between RM5,000 and RM6,000 per hectare for the farmers.

“We request the state and federal governments to provide aid in the form of ploughs, seedlings and pesticides to enable us sow the first crop of this year, starting now,” he said, adding that they already owed the Cherang Rotan AFO between RM1,000 and RM5,000 for cultivation of the destroyed crop.

Farmer Ghozali Seman, 61, said he suffered a loss of RM40,000 after the floods destroyed a portion of his 15-hectare smallholding.-Bernama