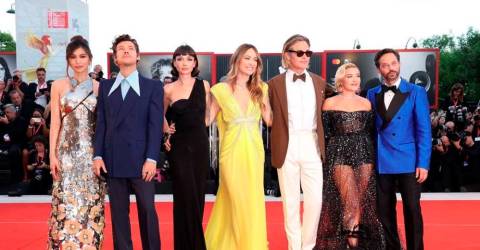 She turned to Instagram to share photos of herself with the cast, which included Harry Styles, Chris Pine, Gemma Chan, director Olivia Wilde, Sydney Chandler, and Nick Kroll.

The 26-year-old actress penned a lengthy post praising everyone for their efforts and congratulating her co-stars.

She wrote: “I’m still taking it all in! Qwoaaar. What a moment this was? A massive congratulations to everyone standing on the carpet. We premiered in Venice. A huge wonderful win it itself. I’d never been to Venice Film Festival before … It was mega! The crowds! The cheers! The energy was incredible.”

Despite claims of a tense relationship between director Olivia Wilde and Pugh, the actress congratulated everyone who worked on the making of Don’t Worry, Darling. “We genuinely wouldn’t have been there without your talent and we appreciate it hugely,“ she added.

The actress also made a particular mention of actor Chris Pine, writing: “ I also just can’t help but post how bloody cute and hilarious Chris Pine is for being the no.1 photographer, getting down on the white pressed trousered knees for angles … now that’s dedication. Love you Chrissy.”