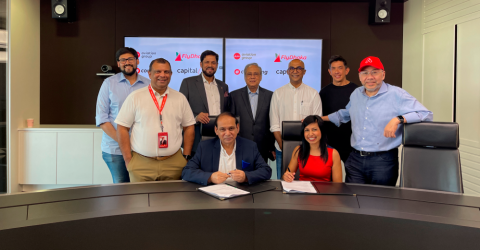 AirAsia Consulting CEO Subashini Silvadas said AirAsia Consulting was born with the mission to provide LCC consultancy services to clients who are either looking to establish new LCC airline brands, or improve their own existing operations, by emulating AirAsia’s successful business model. It will help Fly Dhaka take flight as a new up-and-coming low cost airline and help it create a strong foundation for its operations based on AirAsia’s best practices as guiding principles.

“Given the low LCC penetration of only 11% in the country, both AirAsia and Fly Dhaka see huge potential in the Bangladeshi aviation industry. Eventually, Fly Dhaka will also be able to tap into AirAsia’s network and hubs to allow its passengers to connect to other places in the region. Fly Dhaka, with AirAsia’s support, is expected to become a world-class LCC offering low fares and value for a new generation of passengers, boosted by its active adoption of technology in their operations,” she said in a statement today.

Fly Dhaka CEO Lt Gen M Fazle Akbar (Retd) said AirAsia’s two decades-long experience as a pioneer in the Asean region will help the airline learn from the best and build its capabilities to establish its operations.

“With AirAsia Consulting’s guidance, we will seek new opportunities and ultimately achieve our main goal of being recognised as the country’s best low cost airline. We also believe this partnership will give AirAsia greater access to Bangladesh which is proving to be an exciting market with significant potential given the recent investment boost in the country’s aviation infrastructure.

“Fly Dhaka has secured the No Objection Certificate in October 2021 and is currently in the final stages of securing its Air Operator’s Certificate. Fly Dhaka has also made significant progress in securing the appropriate aircraft for its soon to be launched domestic operations. We will likely be the only local Airbus operator in Bangladesh, utilising AirAsia’s experience of the A320 family of aircraft.”

The latest partnership comes as AAAGL is actively exploring opportunities for a new local airline presence in the region and its consultancy arm AirAsia Consulting is providing advisory services to selected third parties interested in establishing a new low cost airline or existing airline businesses who wish to enhance their efficiency and performance.