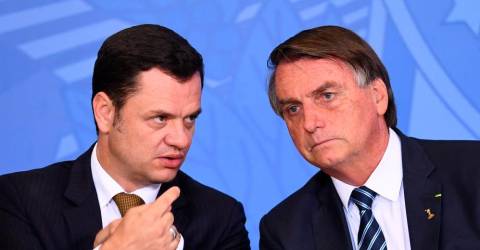 BRASILIA: A former minister in the government of defeated Brazilian ex-president Jair Bolsonaro was arrested early Saturday, local media reported, in connection with the sacking of government buildings.

Thousands of so-called “bolsonaristas” invaded the seats of government in the capital on Sunday, breaking windows and furniture, destroying priceless works of art, and leaving graffiti messages calling for a military coup.

More than 2,000 rioters were detained after the events, for which the full extent of the damage is still being calculated.

A Supreme Court judge announced Friday that Bolsonaro will be included in an investigation into the origins of the sacking, which was sparked by anger at the far-right leader’s election defeat to President Luiz Inacio Lula da Silva.

Anderson Torres, who was Bolsonaro’s last justice minister, was arrested when he arrived in Brasilia from the United States, where both he and his former boss were at the time of the attempted insurrection.

He was wanted under a Supreme Court warrant for alleged “collusion” with the rioters, and stands accused of “omission” in his most recent job as security chief for the capital.

Lula’s new justice minister Flavio Dino, who replaced Torres, said Friday the authorities would give his predecessor until Monday to return to Brazil, or face extradition.

The new minister also confirmed the discovery at Torres’ home of a draft decree proposing emergency steps for the possible “correction” of the October election that Lula won by a razor-thin margin.

The undated and unsigned draft bears Bolsonaro’s name at the bottom, but Dino said the authorship was unknown.

Published in the Folha de S. Paulo newspaper late Thursday, the document foresees the creation of an election “regulation commission” to take over the electoral oversight functions of the Superior Electoral Court. – AFP