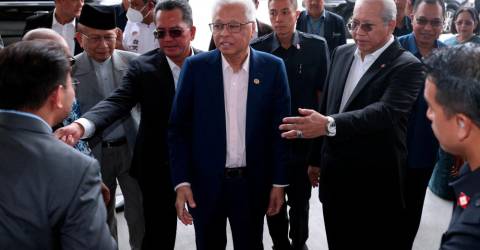 KUALA LUMPUR: The government has yet to discuss forms of action to be taken against the students who were found to have sold their PerantiSiswa Keluarga Malaysia tablets, including blacklisting them, Prime Minister Datuk Seri Ismail Sabri Yaakob.

“So far, we have not discussed the issue with the Ministry of Higher Education (MOHE) and the Ministry of Communications and Multimedia (K-KOMM). They will have to look into this,” he told reporters after opening the Angkasapuri Media City here today.

However, Ismail Sabri called on all students who received the tablets not to sell the device as it is the government’s aspiration to help the students from the B40 households.

“The government is trying to help you.

“So, don’t go selling the tablets for a short-term profit because the long-term benefit of using the PerantiSiswa tablets for your education and for your future is far more important,” he said.

The PerantiSiswa tablets were given to students from the B40 families to enable them to cope in this era of digital education.

At the initial stage of the implementation of the PerantiSiswa Keluarga Malaysia programme, the government said the students need to return the tablets upon graduation but the decision was later changed to allow the students to keep them.

Yesterday, Communications and Multimedia Minister Tan Sri Annuar Musa confirmed that 14 cases of sale of the tablets were reported nationwide so far and the Ministry of Domestic Trade and Consumer Affairs is closely monitoring the development.

“The project officially kicked off in December 2016 and continued throughout the MCO (Movement Control Order) period. The success of the project will begin a new era in national broadcasting,” he said.

The complex has 18 floors of office space, an auditorium with a capacity of 1,000 people, a music recording studio and a music practice studio, three TV studios (M1, M2 and M3), a multi-storey parking space and a plaza as well as an outdoor broadcast vehicle garage. – Bernama