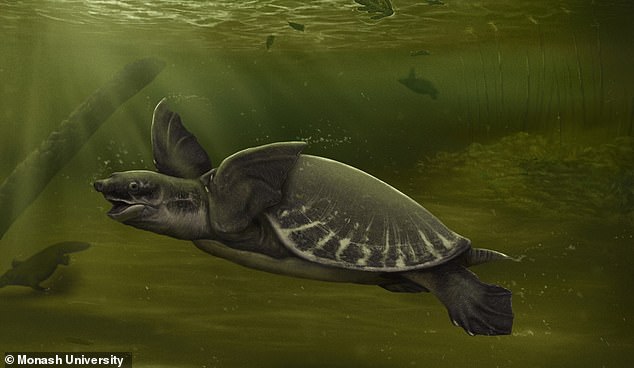 
A five million-year-old pig-nosed turtle fossil found in Melbourne could rewrite the entire evolutionary history of the species and unlock the key to understanding climate change.

The pig-nosed turtle fossil was found during the 1920s in Beaumaris, thousands of kilometres south of where the endangered species lives.

The turtles, which were originally thought to have arrived a few thousand years ago, are usually found in tropical freshwater habitats in Australia and New Guinea.

The pig-nosed turtle fossil (pictured) was found in the 1920s in Beaumaris, thousands of kilometres south of where the endangered species typically reside

But now, a study lead by scientists from Monash University in collaboration with Museums Victoria has completely rewritten the evolutionary existence of the pig-nosed turtle.

The endangered species, thought to be the sole survivors of an extinct group of tropical turtles – known as carettochelyids – that once inhabited the Northern Hemisphere.

‘The discovery of a five million-year-old Pig-nosed turtle fossil in Beaumaris changes this picture entirely,’ he said.

‘This one fossil specimen reveals a previously unknown evolutionary history of tropical turtles in Australia, and suggests we still have much to learn about the endangered pig-nosed turtle.’

The finding could unlock a broader migration pattern of the endangered species after the fossil appeared on the wrong side of the continent. 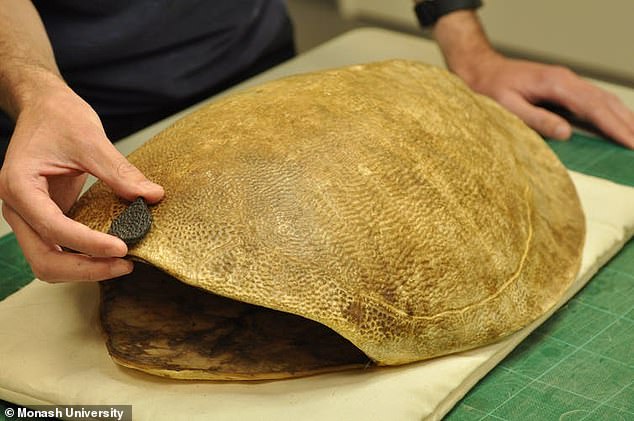 Scientists say the climate in Melbourne was much warmer five million years ago and housed more turtles that usually live in the tropics today.

This latest discovery highlighted the importance of the Beaumaris site, where fossils can be found by simply strolling along the beach.

‘We are so lucky in Melbourne to have such fossils right here in our own backyard,’ said Dr Erich Fitzgerald, a senior curator of vertebrate palaeontology at Museums Victoria and co-author of the paper.

‘The fossils at Beaumaris still have so much to teach us about our past, present and future.’