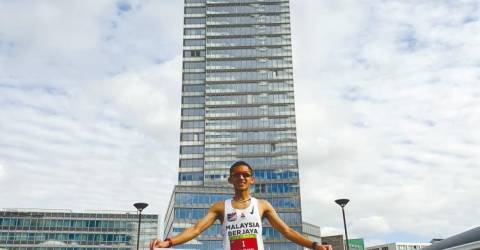 BMF deputy chairperson Datin Seri Sunita Rajakumar expressed respect for the 28-year-old athlete, whom she said works very hard to put Malaysia at the top while achieving
his dream.

“With Wai Ching, it is not just a promise he will go the extra mile to achieve the goals he has set for himself. I am very proud of him as he has single-handedly made Malaysia a name to reckon with in tower running.

“(BMF founder and chairman) Tan Sri Vincent Tan and I are really happy we can support him and make his dream come true. I hope we can have more athletes like him.”

Soh, who received a RM111,600 sponsorship from BMF for a year starting in July to next June, said the money helped him find accommodation and time to train.

Sunita also expressed hope more parties would come together to make tower running a sport that Malaysia can take the lead in, with Soh being an excellent example.

To date, he has won a total of three titles for tower running and two for being the fastest Malaysian at road running events.

Soh will be taking part in the Great North Run (the largest half marathon in the world) on Sept 11 in Newcastle, UK. He will then travel to the US for four tower running competitions at the end of September and in early October.