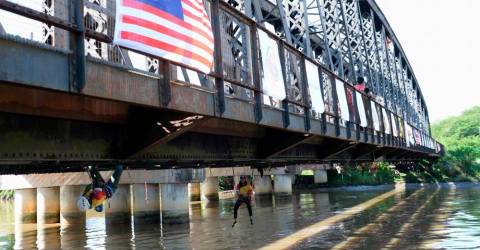 Director of the mission, Syed Alif Iskandar Syed Zainal Abidin, 37, said such a technique, which involved moving in an upside-down position like the ‘Spiderman’ stunt from one end of the bridge to the other, was the first done in the country.

“We wanted to do something different in conjunction with Malaysia Day celebration and the climbing athletes did that by crossing the 80-meter-long railway bridge using the ‘urban roof climbing’ technique, and creating themselves a history, ” he told Bernama when met at the Limbong Kapal Bridge here today.

He said the four athletes involved are Mohd Zamri Hamid, 51, who is the leader, Muhammad Akif Nukman Nazrilazdin, 23, Dzukram Alzam Mohd Zamri, 19 and Wann Iryani Ariffin, 32, the only female in the group.

Mohd Zamri scaled the 80-meter-long bridge solo, followed by the other three. It was indeed a great challenge for all of them in a show of love for the country in conjunction with Malaysia Day,“ he said.

“Mohd Zamri scaled the 80-meter-long bridge solo, followed by the other three. It was indeed a great challenge for all of them in a show of love for the country in conjunction with Malaysia Day,“ he said.

Meanwhile, Mohd Zamri, who is also a climbing sports coach, said it was a proud moment for him and the other athletes to complete the mission despite facing various challenges to realise the feat which they had planned about a month ago.

“We trained for a month for this mission. The original plan was for us to take turns to do it, but, I want to challenge myself and prove to the public that I am capable of doing the mission solo despite my age.

“It rained heavily last night so some of our equipment was wet and this morning we had to dry it first. That took a lot of our energy, and because of the tiredness, and an injury on my finger, I almost gave up after seeing the three of them completing the mission.

“However, seeing the faces of my family members and friends who were at the end of the bridge and listening to their words of encouragement, I knew I had to do it and managed to finish the mission within 25 minutes,” he added.

Meanwhile, Wann Iryani, who has been involved in sport climbing for over 15 years, said today’s mission gave a thousand and one meanings which she would cherish forever.

“It is the longest feat I have ever done and secondly, I am the only female in the team”, said the woman, who is a Fire and Rescue Department personnel in Bukit Kayu Hitam.

“At the start of the mission, I was indeed nervous when the crowd started calling out my name, but I managed to focus on the mission and managed to cross the bridge in 10 minutes,“ she said.

In conjunction with the Malaysia Day celebration today, the public also gets a chance to do the flying fox activity at the Limbong Kapal Bridge.-Bernama