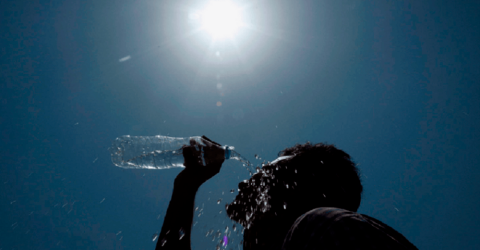 A cascade of extreme weather exacerbated by climate change devastated communities across the globe this year, including sweltering heat and drought across Europe that wilted crops, drove forest fires and saw major rivers shrink to a trickle.

France saw temperatures surge repeatedly in successive heatwaves from May and into October, accompanied by extreme events like wildfires in areas like north-western Brittany, and damaging marine heat waves in the Mediterranean.

“All the months of the year have been warmer than normal, except January and April,“ said Meteo France in a statement.

It estimated the average temperature for the year as a whole would be between 14.2 degrees Celsius and 14.6C degrees depending on December temperatures. That is a significant increase from the previous record of 14.07C seen in 2020, and the highest since records began in 1990.

Annual rainfall is expected to be as much as 25 percent lower than normal, with precipitation in July 85 percent below average. The driest year in France was 1989, which saw a 25 percent rainfall deficit.

Globally, if projections for the rest of 2022 hold, the United Nations says that each of the last eight years will be hotter than any year prior to 2015.

Earth has warmed more than 1.1 degrees Celsius since the late 19th century, with roughly half of that increase occurring in the past 30 years, the World Meteorological Organization said in a report in November.

Greenhouse gases accounting for more than 95 percent of warming are all at record levels, the WMO’s annual State of the Global Climate found.

In the European Alps, glacier melt records have been shattered in 2022, with average thickness losses of between three and over four metres (between 9.8 and over 13 feet), the most ever recorded.

Switzerland has lost more than a third of its glacier volume since 2001.-AFP