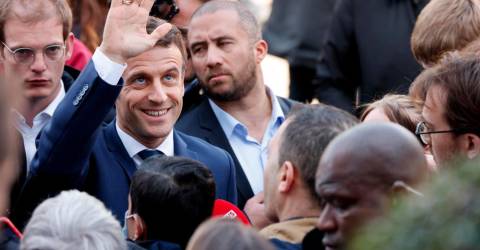 PARIS: French President Emmanuel Macron embarked Monday on a final fortnight of campaigning against his far-right rival Marine Le Pen for a French presidential run-off shaping up to be a much closer fight than their contest five years ago.

Macron came out on top in Sunday’s first round of voting with 27.85 percent, with Le Pen second at 23.15 percent. As the top two finishers, they advance to a second round on April 24.

Far-left candidate Jean-Luc Melenchon came close, after a late surge gave him a score of just under 22 percent.

The Macron-Le Pen duel is a replay of the 2017 election final from which Macron emerged victorious with 66 percent. This time however, polls suggest it will be a closer contest.

Making an aggressive start to the next phase of the campaign, Macron spent hours meeting voters in Denain, a former steel town in northern France where he finished third on Sunday behind Le Pen and Melenchon.

“I realise that people will vote for me to stop her, but I want to convince people. So I may possibly round out my project” with more social welfare measures, he said.

Le Pen met with her campaign team Monday before resuming her months-long grassroots efforts in small towns and rural France later in the week, starting with a visit to a grain farm southeast of Paris.

One poll, however, by the Ifop-Fiducial group suggested Macron could have only a razor-thin win with 51 percent versus 49 percent.

While her opponents accuse her of being divisive and racist, Le Pen has sought to project a more moderate image in this campaign and has focused on voters’ daily worries over inflation.

“The second round is the hardest one,“ Macron’s Finance Minister Bruno Le Maire told RTL radio. “Everything begins again with a new campaign.”

Both candidates will now scramble to woo voters of their defeated first-round rivals.

“We’re going to have to win over the French people who didn’t vote for Emmanuel Macron in the first round,“ government spokesman Gabriel Attal told the France Inter broadcaster on Monday.

In an early boost for the president, Communist Party candidate Fabien Roussel, Socialist Anne Hidalgo, Yannick Jadot of the Greens and right-wing Republicans candidate Valerie Pecresse said they would vote for him to prevent the far-right leader coming to power.

Melenchon told his supporters not to give a “single vote” to Le Pen, but he stopped short of backing Macron directly.

“If Macron wants to convince our voters, he’s going have to work for it,“ said Melenchon’s campaign director, Manuel Bompard.

Meanwhile Le Pen’s far-right rival Eric Zemmour, who garnered just over seven percent on Sunday, threw his weight behind her.

A pivotal moment in the next stage of the campaign will come on April 20 when the two candidates take part in a live TV debate, just like five years ago when a better-prepared Macron won the day.

But this time will be different, said political scientist Brice Tenturier. Macron, he said, “is no longer the new candidate representing a kind of freshness” while Le Pen “is no longer the person people automatically reject”.

Macron is expected to target her past admiration for Russian leader Vladimir Putin, an explosive issue during the Russian invasion of Ukraine.

Part of the battle will be to mobilise the 26 percent of registered voters who abstained in the first round, a sharp increase from the first round of five years ago.

The candidates from France’s traditional parties of government — the Socialists and the Republicans — suffered humiliating defeats.

Sunday’s vote spelled disaster for Hidalgo, the Socialist mayor of Paris, who won only 1.75 percent, a historic low for the party which only a decade ago won the presidency.

The vote for the right-wing Republicans party, headed by nominee Pecresse, collapsed to 4.78 percent from 20 percent in 2017.

On Monday, Pecresse admitted her campaign finances, which included five million euros ($5.5 million) of her own money, were in a “critical” state, and called for donations from supporters.