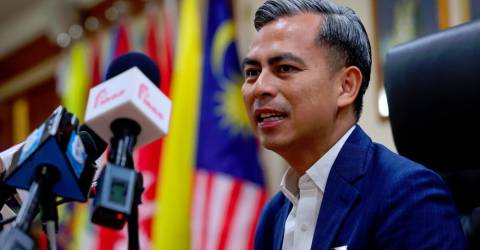 KUALA LUMPUR: Communications and Digital Minister Fahmi Fadzil (pix) said today that he will defend the right to freedom of speech, but only if it is based on existing laws.

He said freedom of speech should never reach the point of defamation and baseless accusations.

“We draw the line, as a politician myself, a member of parliament and now minister, for sure freedom of speech will be defended, but when we detail out the laws, including the Communications and Multimedia Act, there are limitations where if there are offences committed, there will be legal repercussions.

“(So), what we voice out must have basis and can be defended in court,” he told a media conference after attending a briefing during his visit to Angkasapuri, Malaysian Broadcasting Department here today. Also present was Communications and Digital Ministry secretary-general Datuk Seri Mohammad Mentek.

In this regard, Fahmi said among the ministry’s focus would be to establish close cooperation between the Malaysian Communications and Multimedia Commission (MCMC) and social media operators in ensuring the government’s will to protect freedom of speech, but at the same time also ensuring that legal boundaries are always monitored and complied with.

“If there is a violation (of the law) then there must be action taken,” he said.

Separately, Fahmi was confident that issues surrounding the development of Angkasapuri Kota Media, will be resolved immediately, with the completion of the media city complex expected in the first quarter or early second quarter of 2023.

As for sick projects involving the Langkawi RTM and Bintulu RTM buildings, Fahmi expressed confidence they will be resolved as soon as possible through a meeting arranged with the Public Works Department in the near future.

“This involves the people’s money. I don’t like it if there are sick projects and I believe we will be able to handle this well,” he said.

Fahmi said his current focus as minister is to ensure that the Broadcasting Department is ‘future ready’, and called on the department to work on efforts to improve and empower traditional media and online platforms content to ensure the government’s message can be better delivered.

As the official voice of the Unity Government, the Broadcasting Department also needs to air issues raised or resolved by the government, especially on the cost of living, public administration and good governance, in addition to efforts to reduce wastage or leakages, he said.

Asked about cyberbullying, Fahmi said it was a serious issue that has an impact on mental health, adding that the ministry will look into whether existing laws need to be reviewed.

“So, I would like to perhaps soon look at current laws that are in place, the kind of perhaps, whatever shortcomings there are, and see what this ministry can do to make sure that the environment, especially online, is a little bit more conducive,” he said, – Bernama