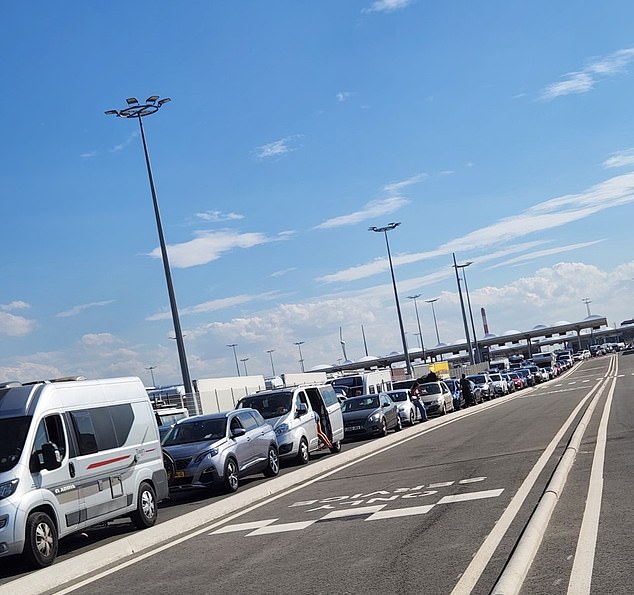 Chaos at Calais: Thousands of frustrated holidaymakers stuck in six-hour queues trying to get to Dover because of ‘delays caused by British Border Control’

By Eirian Jane Prosser For Mailonline

Thousands of holidaymakers have been caught up in ferry chaos again at the port of Calais, after being trapped in six-hours queues on their way back to Dover.

Those travelling with P&O Ferries this afternoon faced long queues, with passengers claiming the disruption emerged because of delays with the UK Border Force.

Peter Naldrett, from Sheffield, was travelling back from France today ahead of his son’s GCSE results day tomorrow.

Thousands of fed-up holidaymakers have been stuck in six-hour queues at Calais today. The frustrated passengers have said the delays are being caused by the UK Border Force

He told the MailOnline: ‘We’ve been stuck in the queue trying to get back into the UK for nearly seven hours.

‘The queues go beyond the ferry check-in and beyond the French border control.

‘The French border control check took half a minute and most of the time they are sitting with nothing to do because the cars are not moving.

‘The queues are going right up to the UK border controls.’

It comes as hundreds of travellers were left stranded in Calais yesterday waiting for ferries to Folkestone after the breakdown of a Eurotunnel train prompted frantic passengers to seek alternative routes back to the UK.

Mr Naldrett added: ‘All the ferry staff I’ve spoken to have told me that it’s been the UK border checks causing delays all week.

‘We were booked on the 4pm ferry to get back to Sheffield for my son’s GCSE results – looking like we’ll have to drive straight to school.’

Mehmood Abdul Hayee, who is travelling with his two disabled parents and three kids back to London, has been stuck in the queue for more than four hours.

He said that thousands of British citizens are stuck in the queue with ‘no food, no water and bad toilet facilities’.

‘It means in five hours we have just covered a few yards. They just said it’s normal vacation days but I have never seen this before.

‘My parents are disabled and cannot walk or sit very long.’ 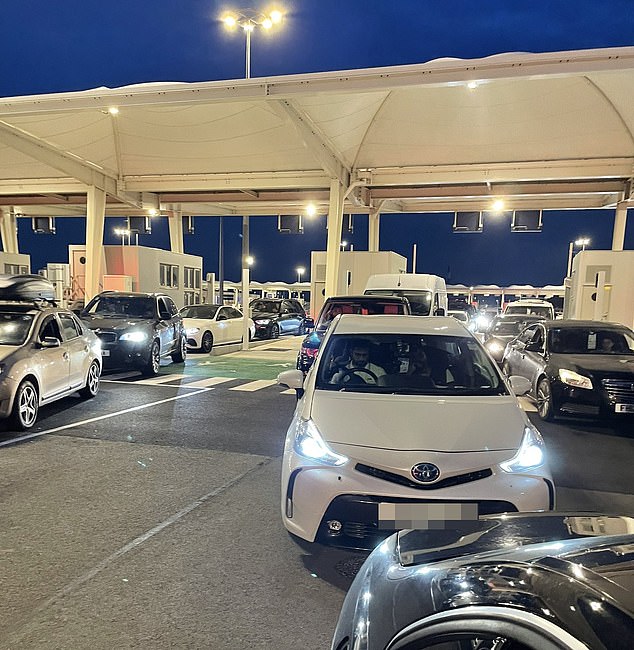 Peter Naldrett, from Sheffield, has been stuck in queues for almost seven hours and is eager to get home in time for his son’s GCSE results day tomorrow

Sarko Mahmoud, who was travelling from Holland to London, has been stuck in the line for more than two hours and is hoping to get onto a ferry before 11pm.

He said: ‘It’s really frustrating so many cars, barely moving.

‘They’ve put us on the 22:45 ferry now, but who knows if we’ll make it at this point still more checks to go past.’

Mr Sarko added that there were ‘many, many cars’ but ‘not many available lanes open’. 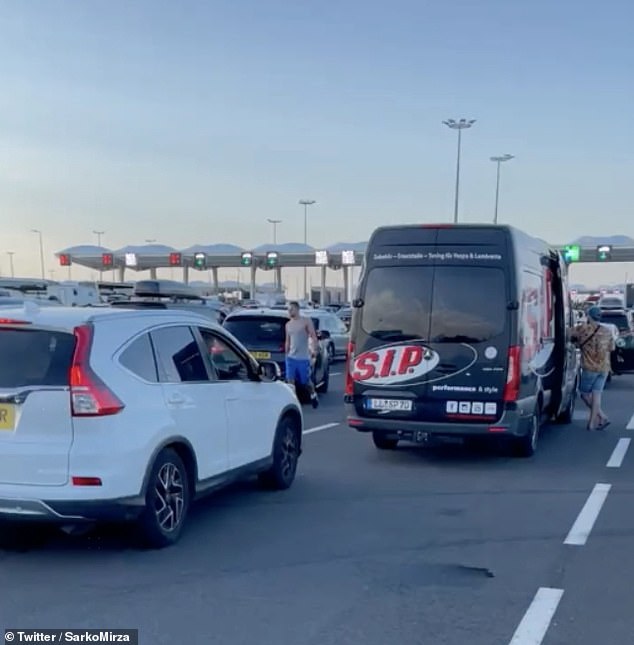 Another frustrated traveller said: ‘It took us 5.5 hours from arrival until we managed to board the ferry.

‘There were no updates, information, or text messages from P&O at all during this time.

‘It was 26C in the sun and no water was offered either. There were thousands of cars waiting.’

The fed-up passenger added: ‘The cause of all the delays was all down to UK Border Control.

‘There were only four booths open for all the thousands of travellers trying to get through.

‘This is a crazy situation. They should not be able to get away with this.’

‘Wait times that some passengers may have experienced today follow disruption caused by technical issues on cross channel services yesterday evening – now resolved – which had considerable knock on effects.’

P&O Ferries have been contacted for a statement.