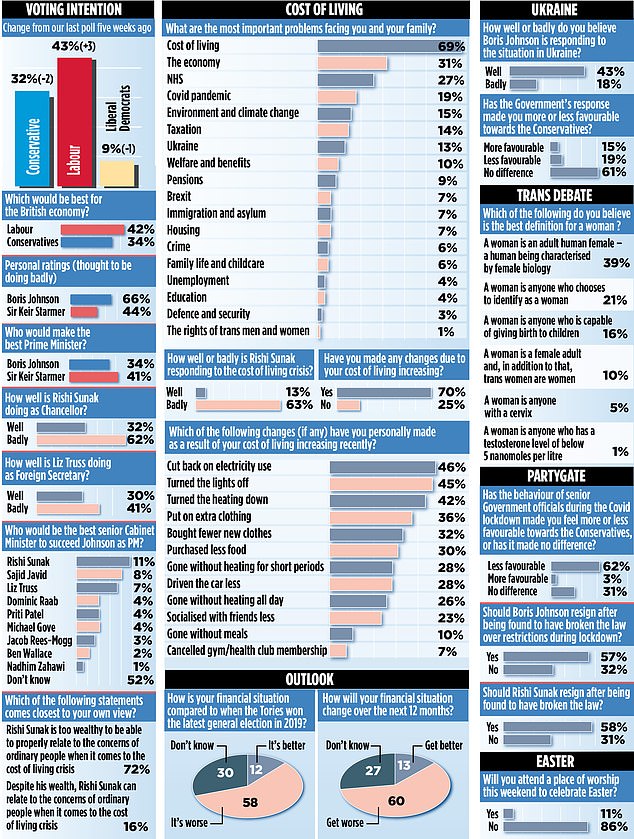 Fuel cost crisis sees 26 per cent of Britons go without heating while almost a third have cut back on food shopping, new poll shows

By Anna Mikhailova For The Mail On Sunday

Seventy per cent of Britons have already made day-to-day changes in response to the rising cost of living, from turning the lights off to driving less.

One in four have gone without heating all day as a result of soaring bills, a poll for The Mail on Sunday has shown.

Nearly half of those surveyed have cut back on electricity use, while almost a third admitted to buying less food, as purse strings tighten across Britain.

Seventy per cent of Britons have already made day-to-day changes in response to the rising cost of living, from turning the lights off to driving less, results of a poll (above) has shown

Nearly one in four socialised less with friends and ten per cent have gone without meals due to rising costs.

The Government’s popularity is taking a hit as a result, with 59 per cent of people saying its response to the crisis has made them feel ‘less favourable’ towards the Conservative Party.

Labour has an 11-point lead, the highest since the 2019 election. More people also thought Sir Keir Starmer would make a better Prime Minister than Mr Johnson.

Chancellor Rishi Sunak is seen by two-thirds of people to be responding ‘badly’ to the cost of living crisis, with only 13 per cent saying he has handled it well.

Forty-two per cent said Labour would be best for the economy, compared to 34 per cent for the Tories.

And 72 per cent of people said they think Mr Sunak is ‘too wealthy’ to be able to relate to ordinary people’s concerns when it comes to the cost of living crisis.

The Chancellor has recently been hit with criticism over his wife’s non-dom status and questions about his own finances. 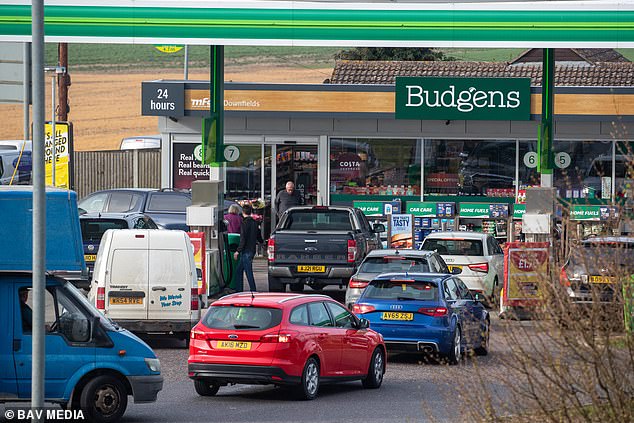 Nearly half of those surveyed have cut back on electricity use, while almost a third admitted to buying less food, as living cost crisis sends fuel costs soaring

More than half agreed with the phrase ‘The more I hear about Rishi Sunak, the less I like him’, while only five per cent said they like him more, according to the Deltapoll survey of 1,550 British adults last week.

The results have been weighted to represent the population as a whole.

Despite the Chancellor’s plunging personal ratings, he still tops the list of senior Cabinet Ministers the public think could succeed Boris Johnson as Prime Minister, when asked to choose between them.

Last night, a Minister said this illustrated there is no viable candidate to replace Boris Johnson.

But his handling of Ukraine does not appear to have convinced more to vote Tory – despite 43 per cent saying Mr Johnson has responded well to the crisis, 61 per cent said this made no difference to how they view the Conservatives.

Joe Twyman, of Deltapoll, said: ‘A combination of public dissatisfaction with the cost of living crisis and parties during lockdown has left the Conservatives falling some way behind Labour across a range of important measures.’