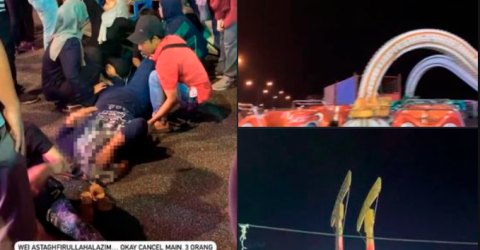 Three individuals including a child were injured after falling from a fun fair ride at Eco Grandeur, Puncak Alam, near here.

Kuala Selangor District Police chief Supt Ramli Kasa said a team rushed to the scene of the incident after receiving a phone call about the incident at about 8.50pm, Bernama reports.

“The three of them fell while the ride known as the ‘Sotong Ride’ was in motion. All the victims were taken to Shah Alam Hospital in an ambulance,“ he said in a statement yesterday.

He said the case would be investigated according to Section 6 of the Selangor State Entertainment & Places of Entertainment Enactment 1995 for operating without a licence.