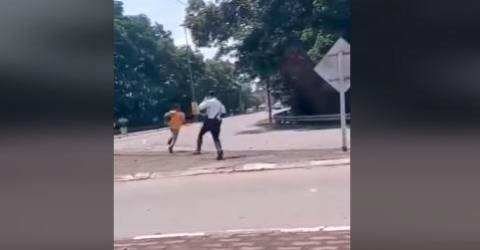 THERE’S no point going against the authorities because at the end of the day, you will have to deal with the consequences if you’ve done something wrong.

The @Inforoablock Facebook page uploaded a video on Jan 18 where a man can be seen escaping upon seeing a roadblock. The incident took place in Pasir Mas, Kelantan.

The man took off running and a traffic police started chasing behind him and the video ends with them disappearing down a road.

The 30-second video caused many netizens to comment that it was one of the funniest chases they had seen so far.

One user said: “This looks like a father chasing his son.”

“This really is police and thief,” another user commented.

While everyone noted how hilarious the video was, many also praised the police officer for being dedicated to his job.

It is still not revealed on why the man was running away from the roadblocks but netizens certainly had a good laugh watching the video.

Why do you think he was fleeing the police roadblock?