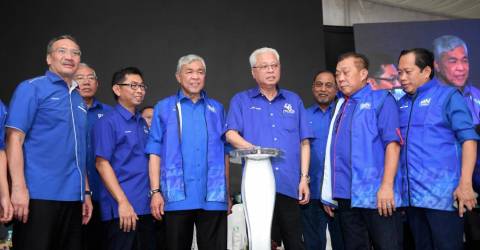 KIMANIS: Barisan Nasional (BN) and Gabungan Rakyat Sabah (GRS) have a formula agreed upon by both sides to avoid any clash of seats in the upcoming 15th General Election (GE15).

He gave assurance that there would no clash of parliamentary seats between both parties in this GE.

“GRS will not field a candidate where BN will be contesting. We already have a formula that has been agreed upon and it will be announced by Datuk Seri Bung Moktar Radin and Datuk Seri Hajiji Noor.”

Ahmad Zahid also said that the BN and GRS candidates for GE15 would be announced by Bung Moktar and Hajiji soon.

Asked if the list of Sabah BN candidates had been finalised, Ahmad Zahid said he would confirm the list after an official meeting with the state BN and GRS leaders.

Earlier, in his speech, Ahmad Zahid reminded the BN machinery and GRS not to sabotage candidates from both coalitions while campaigning in GE15. “We should work as brothers and sisters to maintain stability in Sabah,“ he added.

Ahmad Zahid also said that the BN-GRS solidarity would be an important element for victory in GE15 and he hoped that cooperation between two would bring stability and prosperity to Sabah and its people. – Bernama