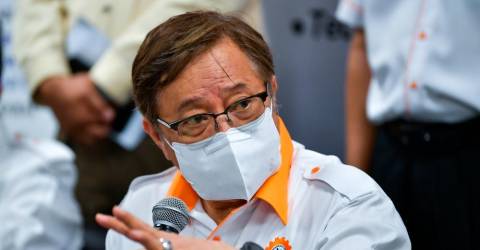 KUCHING: Gabungan Parti Sarawak (GPS) will highlight candidates for the 15th General Election (GE15) who are able to make GPS a strategic coalition and determine the political roadmap of Malaysia to form a stable and responsible Federal government.

Recalling the political instability in the country following the ‘Sheraton Move’ in 2020, GPS chairman Tan Sri Abang Johari Tun Openg (pix) said it was the coalition that played a crucial role in determining the prime minister at the time.

“For the sake of a stable Malaysia, I was sought to choose who would be the prime minister,“ said Abang Johari, who is also Sarawak Premier, when speaking at the launch of the GPS Youth Machinery at the Perpaduan Stadium here, today.

Touching on the candidate line-up which will be announced on Nov 3, Abang Johari said GPS would ensure that all 31 candidates possessed the ‘Sarawak first’ spirit to voice the state’s agenda and rights in the Dewan Rakyat.

“We will include young people, old people, women, men and those with experience as candidates and send them to Parliament,“ he said.

Abang Johari also emphasised that Sarawak should be the ‘heart’ of Malaysia because the state had the required strength and a high quality of leadership.

When met by reporters later, he said that GPS’ manifesto for GE15 would also touch on aspects of the Malaysia Agreement 1963 (MA63), as well as the renewal of Sarawak’s education and economic plans.

“Over the past five years, GPS has played its role responsibly, not only on the political agenda but we also played our role towards achieving stability in Malaysia,“ he added.-Bernama