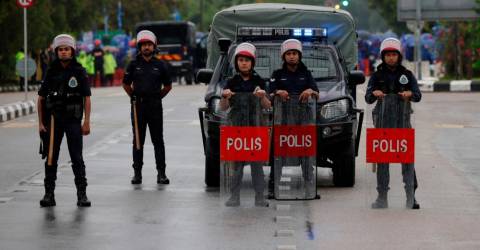 KUALA LUMPUR: The candidate nomination process for the 15th General Election (GE15) held across the country today was smooth and under control, according to the police.

Bukit Aman Internal Security and Public Order Department director Datuk Hazani Ghazali said no provocations were detected at any of the nomination centres.

“Alhamdulillah, there were no arrests and no provocations were detected. Malaysians are mature and full of discipline,“ he told Bernama today.

In KUALA LUMPUR, checks by Bernama found that the situation at the Batu parliamentary seat nomination centre at Sekolah Menengah Kebangsaan Sentul Utama was under control.

“Since early morning, police have set up roadblocks to prevent supporters from gathering. A total of 152 police personnel have been deployed to control traffic and maintain law and order,“ he told Bernama when met at the nomination centre today.

The same situation was also reported at the nomination centres for Ampang and Pandan parliamentary constituencies under the jurisdiction of the Ampang Jaya District Police Headquarters.

“All party supporters who were present did not cause any provocation and abide by the stipulated rules set by the authorities.

“The police will maintain the same momentum until the early voting day on Nov 15 and polling day, Nov 19,” he said when met at Dewan Dato Razali today.

“The situation at the nomination centre at Dewan Komuniti Bandar Baru Salak Tinggi was under control, with eight candidates filing their papers.

“The police presence was to ensure a smooth nomination process and that supporters of political parties followed the instruction of authorities,” he told Bernama. – Bernama