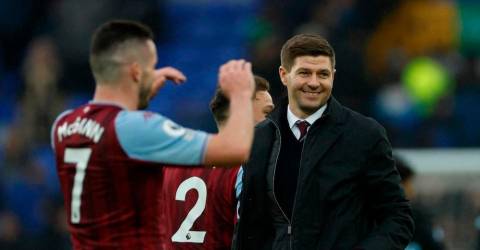 LONDON: Under-fire Aston Villa boss Steven Gerrard insisted on Tuesday he will not hide from the pressure of trying to turn his struggling side’s season around.

Gerrard is fighting to save his job after being booed by Villa fans after Sunday’s 1-0 defeat at home to West Ham.

The 42-year-old was hailed as an impressive appointment when he replaced the sacked Dean Smith, having ended Celtic’s domination of the Scottish Premiership in his reign as Rangers manager.

But Gerrard has since won only 11 of his 31 league games as Villa boss and he knows the pressure is mounting ahead of Wednesday’s visit to leaders Arsenal.

“You get out of it by turning your results around,“ Gerrard told reporters.

“We’ve shown before that after a difficult patch we can come through it and put patches of games together in a different way and move up this table.

“I’ve been through tough times as a player and in my short managerial reign. I’ve been faced with challenges, heat and pressure, and I’ll accept that and take it on my shoulders.

“There’s no one more determined than me to change this current situation.

“I see this as an interesting challenge for myself in this situation and I won’t shirk away from anything. I’ll face it head on and try and put it right.”

Villa follow their trip to the Emirates Stadium with a home game against champions Manchester City on Saturday.

Defeats in those two games could leave Gerrard on the brink of the sack and he called on Villa’s players to rise to the challenge.

“I said to the players after the game (West Ham) that we haven’t started the season how we would have wanted, but we have a choice between going into a shell and feeling sorry for ourselves and the results continue or we step forward,“ he said.

“I want my senior players and all my players to step forward. I’ve got total belief and confidence in these players.

“We need our players in the best form possible to give us a better chance to get results.

“Arsenal were in this situation themselves 12 months ago when they didn’t start the season very well.

“They’ve started with a 100 percent record, but for me that’s a fantastic opportunity and a big challenge for me and my players to go and try to ruin that.” – AFP