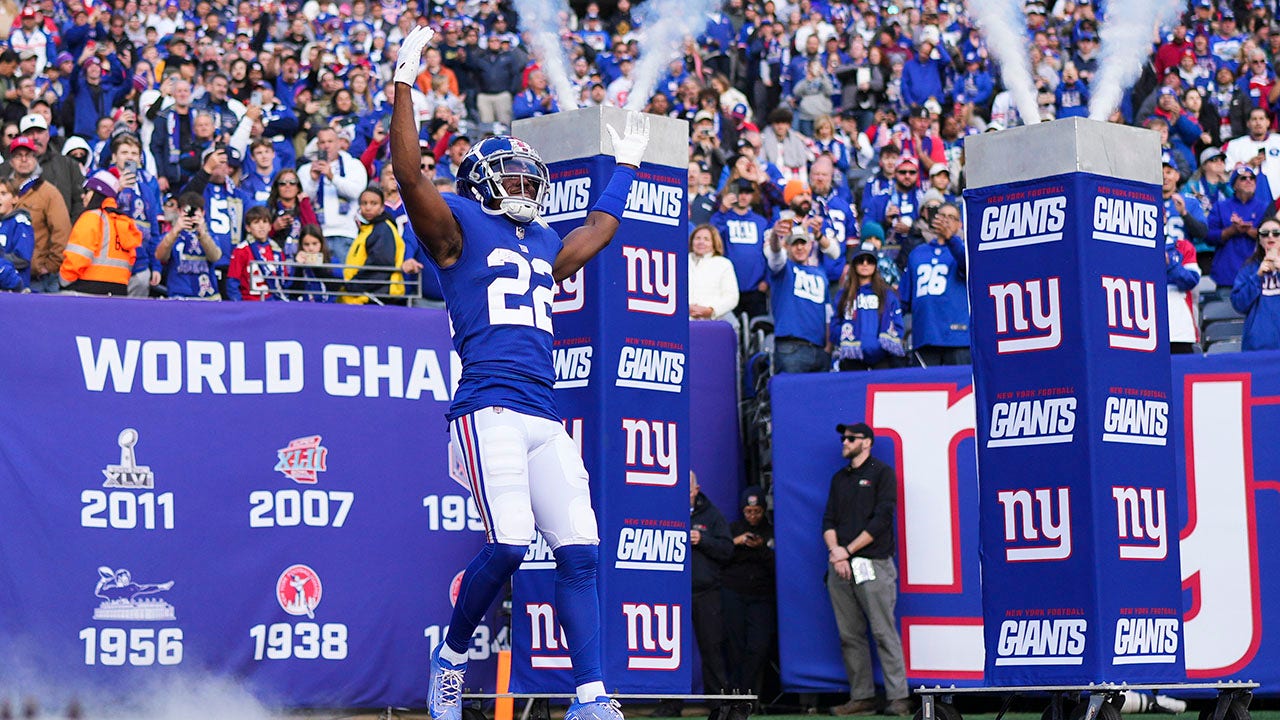 The New York Giants are heading into December football with a real chance of making the playoffs for the first time since 2016 and while the pressure is on, beginning with a critical divisional matchup on Sunday, veteran cornerback Adoree’ Jackson is counting his “blessings” through it all.

Jackson has been sidelined since the Giants 31-18 loss to the Detroit Lions in Week 11 after suffering a significant knee injury during a punt return.

Adoree’ Jackson of the New York Giants tips a pass intended for Christian Kirk of the Jaguars at TIAA Bank Field on Oct. 23, 2022, in Jacksonville, Florida.
(Courtney Culbreath/Getty Images)

In a recent interview with Fox News Digital, Jackson said he’s kept a positive attitude throughout his rehab and is grateful that his injury wasn’t more serious.

“I’m trying to rehab and get back on things I can control or just my attitude, staying positive in a situation. Things could have been worse and I’m just thankful of the situation that I’m in and with the season and the way the guys are playing and how they treat us there and just the morale of the team in general. So just try to remain positive, keep a positive attitude and take every day as if you don’t know what may happen. But if you put your best effort in, the results will come as they come.”

Defensive coordinator Don “Wink” Martindale spoke about Jackson’s absence for the first time this week and said despite not knowing when he’ll be able to take the field again this season, the top cornerback is still putting in the work.

“I think it will be one of those things at the end of the season we’ll look at the total impact of it. The biggest impact is on the person himself because I know how hard he’s worked and how well he’s played. That’s the toughest thing to see a thing like that happen,” Martindale said.

“We’ve been dealing with injuries all year and we’ve just got to put the next guy in there, but I miss the person that’s out there on the field. He’s out there right now during walk-throughs, talking to the corners and still leading like a champ.”

And for Jackson, that level of involvement is “important” – especially with playoffs on the line.

“It’s about leading by example,” he told Fox News Digital. “At the end of the day, you don’t know how long you can play this game but at the same time when I was younger, I had guys who were helping me out and trying to show me the ropes and be that voice or that help for me and this is me trying to pay it forward… just trying to make sure that those guys are ready and they know that I have their back.”

The road to the playoffs for the injury-riddled Giants won’t be easy. After winning six of its first seven but losing three of the last four, New York will now be tested with four divisional-round matchups.

But for Jackson, he chooses to look at the silver lining.

“I take it back to when I was in Tennessee and went to the AFC Championship game and we lost and just hearing the older guys saying that this just doesn’t happen often – you don’t get to the playoffs like this in our sport. I was so fortunate. I was in Tennessee for four years, made the playoffs for three out of four years and then coming in New York last year, having a losing season and missing the playoffs and then getting back into a position where we possibly can make those playoffs – you just understand the blessings that you have and just try to relish in the moment.”

Adoree’ Jackson of the New York Giants runs onto the field during introductions against the Houston Texans at MetLife Stadium on Nov. 13, 2022, in East Rutherford, New Jersey.
(Cooper Neill/Getty Images)

Outside of meaningful football in December, the holiday season will be a busy time for Jackson off the field after recently launching a comprehensive delivery protection service – PorchPals.

“I got my package stolen before and that’s when it really hit home for me. It was a gift for my dad for the holidays – a pair of retro Jordans,” Jackson told Fox News Digital of the new platform meant to provide consumers with affordable insurance designed to protect an unlimited number of packages delivered to their doors.

“That’s really the drive behind it now, you don’t really know something affects you until it happens to you.”