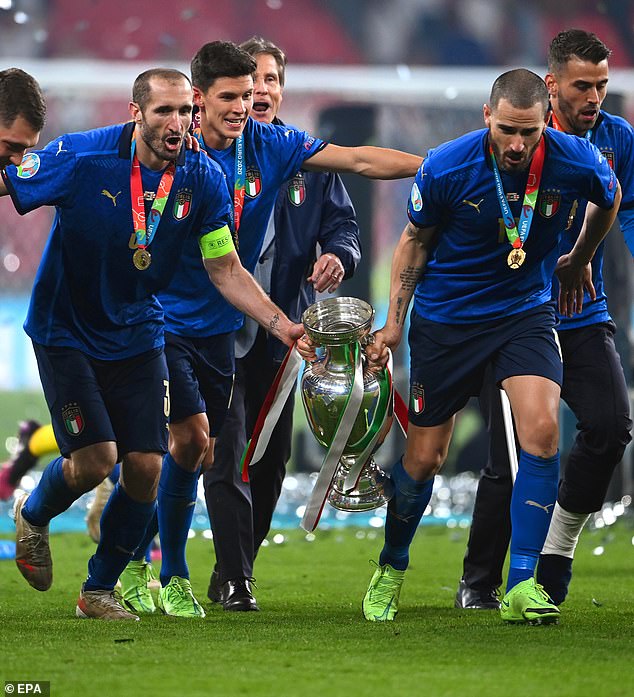 In the end, as the party got going, the two old stagers were there with the tightest grip on the most valuable commodity.

Through the downpour of silver tickertape and the flashing pyrotechnics, Giorgio Chiellini and Leonardo Bonucci emerged carrying the Henri Delaunay trophy. It was not going to be relinquished from their grasp until they were good and ready, which was symbolic of the previous 120 minutes.

These two old stagers had put Harry Kane under lock and key during a night of high tension, to book end their tournament. It wasn’t that England’s captain didn’t play well, it was simply the fact he wasn’t given a sight of goal by these gladiators. 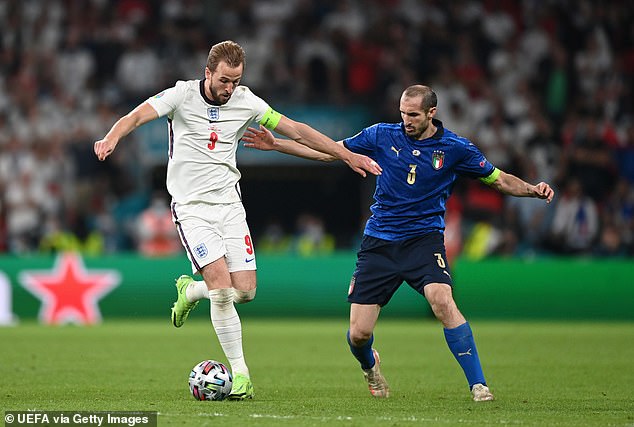 It was the same, too, for Raheem Sterling. Whenever England’s player of the tournament began to dance into the penalty area, he found himself pounced upon by Chiellini and Bonucci in the way big cats spring out of the long grass to ambush gazelles.

They were indefatigable, the leaders and tone-setters of this team, for whom the title ‘European Champions’ rests easily. They were superb in their opening game against Turkey, way back on June 11, and have continued to be ever since.

Make no mistake, had England tackled opponents with a defence slightly inferior to Italy, they would have won this absorbing contest; had England raced into a second minute lead against anyone other than opponents without Italy’s mental resolution, the silverware would be in their keeping.

Kyle Walker, John Stones and Harry Maguire were never taken out of their comfort zone by Ciro Immobile or Lorenzo Insigne; the outstanding Declan Rice and Kalvin Phillips outpointed Jorginho and Marco Verratti in midfield.

But… For England there was a ‘but’ to break hearts. Chiellini and Bonucci, the pillars on whom Juventus’s dominance was built for so long, played like men possessed, their readiness for battle summed up by the way bounced and hollered out their national anthem.

‘It was a tough game start in the worst way possible with England scoring after two minutes,’ said Chiellini. ‘It was difficult for us with all the fans in the stadium giving them energy to win. But we were quiet and calm, which was important. Then we start to play, play, play.

‘We find the right pass, we find the right shot: this is the way to win. It’s history. It’s a dream come true, it’s unbelievable. We feel some magic in the start and it’s grown day by day. We’ve seen the image of Cannavaro and now we are lucky altogether.’ 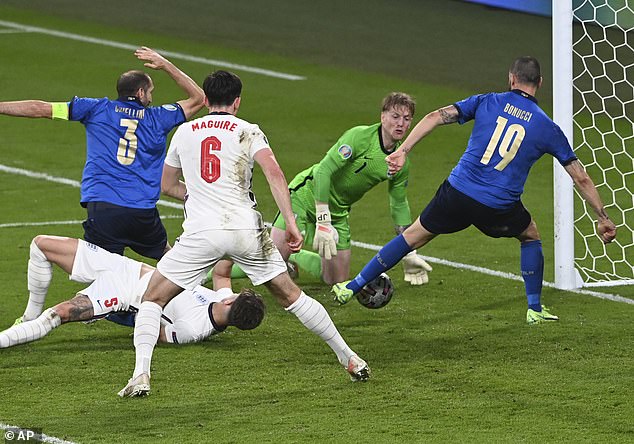 In all the big moments, they were there, such as Bonucci scoring Italy’s second half equaliser

How fitting he mentioned that name. When Italy last conquered the world in 2006, Fabio Cannavaro was their captain and won the Ballon d’Or thanks to the mighty displays he conjured in Germany: non passerano­ – they shall not pass – are words that course through Italian defenders.

Bonucci and Chiellini found the strength to play that would have the greats who had gone before – Paolo Maldini, Franco Baresi, Giuseppe Bergomi and Claudio Gentile to name a few – nodding approvingly. It was the reason, when England dominated, they never buckled.

In all the big moments, they were there. When they needed an equaliser, Bonucci popped up to thrash in from six yards. The image of him standing on the advertising hoardings, screaming with joy, is an image that will surely become the wallpaper of thousands of mobile phone screens.

At the moment when it appeared the penalty shootout was ebbing away from them, Bonucci whipped his spot-kick past Jordan Pickford with such proficiency that you could have mistaken him for a playmaker.

There is a reason Italy are 35 matches undefeated. Roberto Mancini has moulded a team that might be lacking what you would once have called ‘galacticos’ but they are high on energy, they have world class quality and an unbreakable resolution.

Plenty of other nations would have capsized in the penalty shootout, folding as the cacophony of whistles got louder and louder. But, instead, they kept their nerves and in Gianluigi Donnarumma, they had someone else to maintain the traditions of Gianluigi Buffon and Dino Zoff. 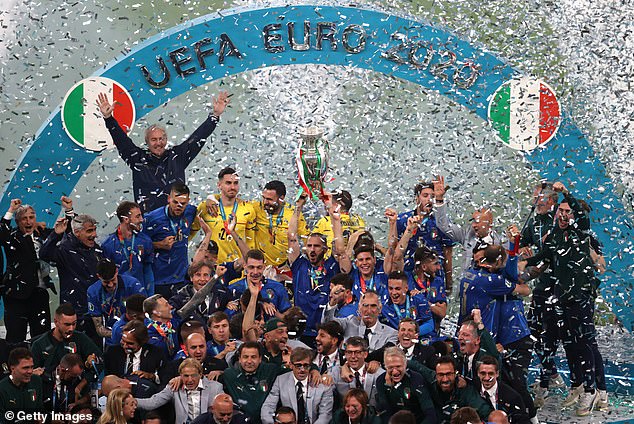 ‘I was lucky as I played with Gianluigi Buffon,’ said Chiellini. ‘Now I play with Gigi Donnarumma and it’s the same.’

Donnarumma looked like a yellow brick wall as he stood between the posts, his hulking frame looked enormous from one end of the stadium – it must have looked gigantic from 12 yards. His saves from Jadon Sancho and Bukayo Saka, quick and agile, were outstanding.

The last one inflicted a wound to England that will not be easily healed. There was so much will in the stadium, so much desperation, that the hangover is going to be long and painful. It didn’t deserve to end in such a manner after all they have done.

From every loser, however, there is a winner and Italy are deserving. The happiness on show, from Mancini, his colourful assistant Gianluca Vialli and Attilio Lombardo, was pure and unadulterated. As the trophy was passed around, they made sure they gave credit to Chiellini and Bonucci. It was only right.