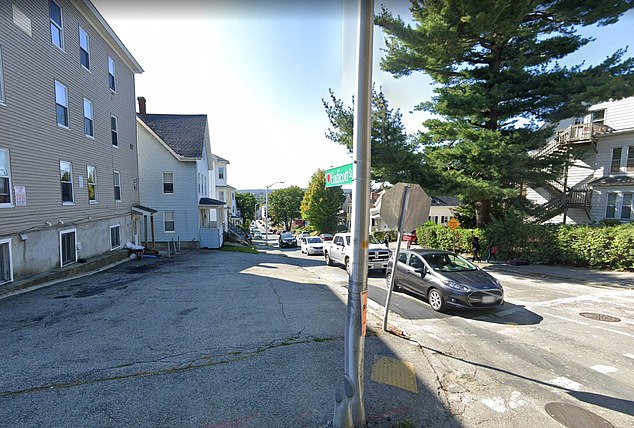 Girl, 11, breaks free from her kidnapper, 51, by kicking him and running into a local business for help after he lured her by offering to show her his dog

An 11-year-old girl from Massachusetts escaped from a man trying to snatch her off the street by kicking him and running to get help.

The incident took place on Sunday night in Worcester, leading to the arrest of 51-year-old Andrew Merriam.

Merriam, 51, of Hudson, faces charges of enticing a child, attempting to commit a crime and assault and battery, Worcester police said in a statement.

Andrew Merriam was arrested in Worcester, Massachusetts, on counts of enticing a child, attempting to commit a crime and assault and battery for allegedly trying to kidnap an 11-year-old girl in the area of Endicott and Vernon streets (pictured)

Merriam approached the girl just before 8pm on Sunday in the area of Endicott and Vernon streets, and asked her if she wanted to see his dog, police said.

He grabbed the girl and repeatedly prevented her from escaping until she kicked him, according to police.

The girl ran into the business and called for help. She gave police a description of her kidnapper, which was transmitted to all officers.

As a K9 officer was responding to the scene, he saw a man matching the victim’s description walking down Vernon Street toward Kelley Square.

When the cop approached Merriam, he allegedly became ‘confrontational,’ prompting the officer to call for backup. The suspect was then taken into custody.

Police say there was another man with Merriam at the time of the abduction attempt, but he has not been apprehended or identified.

The child described the second person of interest as a black man, possibly balding and wearing a gray hooded sweatshirt.

The girl was not harmed during the kidnapping attempt.

Merriam appeared before a judge on Monday and pleaded not guilty to the charges against him, reported Boston 25. He is due back in court on November 16.