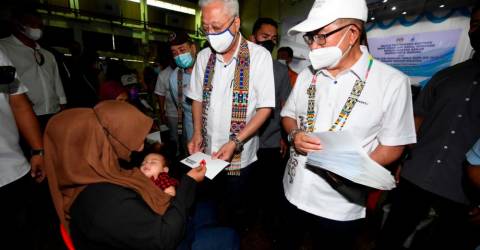 The prime minister said investigations were being conducted by various parties, including the Securities Commission (SC) and MACC itself, proving that the government was not keeping quiet on the matter as alleged.

“I am always informed and keep tabs on issues related to MACC. Action has been taken and the impression given that the government is keeping quiet is wrong. MACC is an independent commission with its own procedure to handle such matters.

“Let’s wait for the investigation to be completed. We cannot jump into conclusion that Azam Baki is guilty. We have to be fair to all and only take action after the investigation is completed,” he told a press conference after presenting cash aid and fruit baskets to 206 families affected by floods here, today.

Ismail Sabri said this when commenting on a statement yesterday by the Pakatan Harapan presidential council asking for Azam and Anti-Corruption Advisory Board chairman Tan Sri Abu Zahar Ujang to be immediately investigated by an independent body and to be temporarily relieved of their duties until the investigation is completed.

The prime minister gave an assurance that he would not compromise with people involved in wrongdoings, but wanted all quarters to be fair and consistent on such matters.

“We must have confidence in our system. Let MACC and the Securities Commission investigate first. Previously, there was a Penang chief minister who was investigated, but no one suggested that he should take leave. We have to be consistent and should not practise double standards,” he said.

Ismail Sabri said the government would ensure that there was no interference in the work of MACC as it is an independent body.