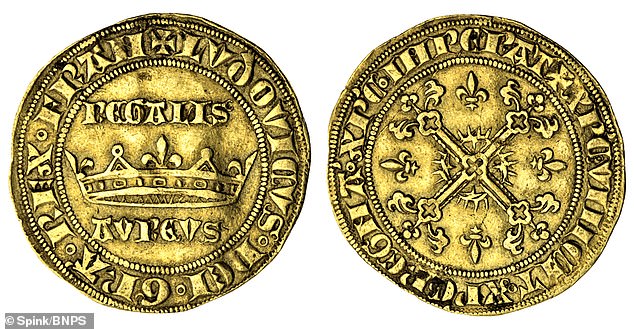 By Laurence Dollimore For Mailonline

The extremely rare ‘Royal d’or’ coin was one of six recovered from a treasure hoard found at Deauville, in Normandy, France, during new town planning in 1861.

The set of coins were a gift from the Emperor of Constantinople to King Louis IX of France in 1239.

The Bibliotheque Nationale in Paris acquired one of the trove in 1862. The rest were sold by coin dealers to private collectors across Europe.

The extremely rare ‘Royal d’or’ coin (pictured) was one of six recovered from a treasure hoard found at Deauville, in Normandy, France, during new town planning in 1861

Gregory Edmund, auctioneer and world coin specialist at Spink, said: ‘It is very rare for a coin to capture and reflect such a defining event in world history, let alone be so closely associated with the symbolism of Christ’s crucifixion.

‘The excellent price shows the global interest in coin collecting that has boomed since the pandemic and recent fluctuations in the value of the pound..’

Until April 2019, the ‘Crown of Thorns’ had been was on display at Notre Dame Cathedral.

Following the devastating fire, it was rehoused at the Louvre Museum.

It comes after a lucky couple who discovered an incredible hoard of 264 gold coins dating back to the reign of King James I under their kitchen floor sold them at an auction for nearly £755,000 earlier this month – three times their original estimated value. 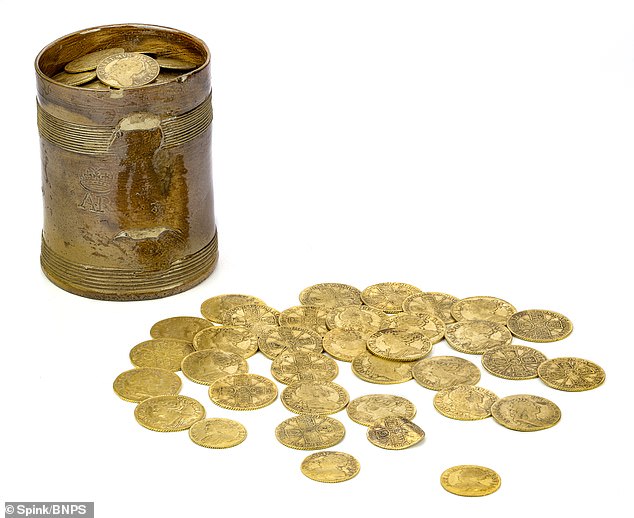 An unnamed couple made an astonishing find of 264 gold coins while getting a new floor put down in their 18th century detached home in the village of Ellerby, North Yorkshire, it was reported earlier this month 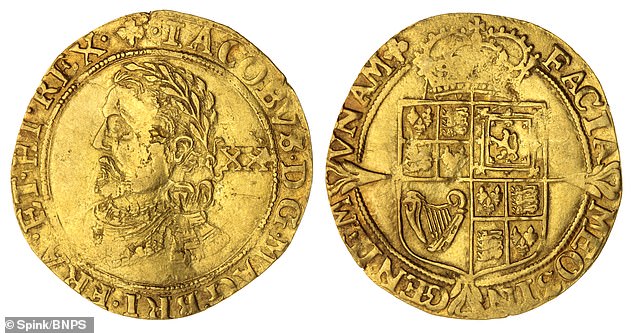 The auction included this ‘pattern bust’ James I laurel 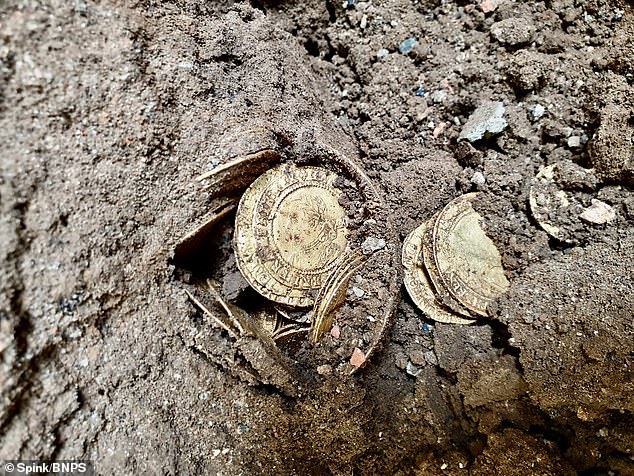 The unnamed couple made the astonishing find while getting a new floor put down in their 18th century detached home in the village of Ellerby, North Yorkshire three years ago, just six inches under the concrete.

The gold coins – some of which are more than 400 years old, dating back as far as 1610, while others stretch to 1727, meaning they cover the reigns of James I, the executed Charles I, and King George I – had been kept in a salt-glazed earthenware cup for around three centuries.

They had been collected by Joseph Fernley and his wife Sarah Maister, members of a wealthy and influential merchant Hull-based family who traded in iron ore, timber and coal, and whose latter generations were Whig politicians and Members of Parliament.

An expert from London auctioneers Spink & Son visited the property to evaluate the hoard – and this year the coins sold for a staggering £754,320.

One of the highlights of the sale – a George I guinea from 1720 which was mistakenly minted without a king’s head on it, instead having two ‘tail’ sides of the coin – fetched £9,600, while a  Charles II guinea from 1675 which incorrectly spells the king’s Latin name CRAOLVS instead of CAROLVS also sold for £9,600.

Auctioneer Gregory Edmund called the find ‘one of the largest on archaeological record from Britain’.