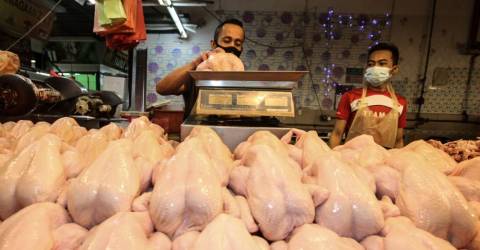 PUTRAJAYA: The price of chicken and eggs will go up even higher if there is no government intervention, says Domestic Trade and Consumer Affairs Minister Alexander Nanta Linggi.

Therefore, he said the government including the Domestic Trade and Consumer Affairs Ministry (KPDNHEP) has and will continue to take proactive steps to balance the rise of chicken and egg prices in the market.

Among the steps already taken were extending the Malaysian Family Maximum Price Scheme (SHMKM) until Feb 4, importation of frozen round chicken and providing soft loans facility to chicken breeders to overcome the sudden rise in chicken prices in the market.

Nanta said the implementation of SHMKM which was scheduled to end on Dec 31 2021 had been extended another 35 more days effective Jan 1 until Feb 4, 2022, while the ceiling price for chicken has been fixed at RM6.10 per kilogramme (kg) ex-farm, RM7.80 per kg wholesale and RM9.10 per kg retail.

Apart from that, the Agriculture and Food Industries Ministry (MAFI) also imports 10,000 metric tonne frozen round chicken or 5.5 million chickens a month.

He said the statement was not a fabrication but based on information received from the engagement session held on Jan 6 with MAFI, Veterinary Department, Finance Ministry, Agrobank representatives and the Federation of Livestock Farmers’ Associations of Malaysia (FLFAM).

Nanta said the government also provided soft loans to the country’s poultry industry to overcome the surge in chicken prices in the market with an allocation of RM262 million to help farmers affected by rising fertilizer and pesticides prices.

“Of that amount, a total of RM200 million is provided as agro-food loans at zero interest rate with a six-month moratorium on repayment through Agrobank and the Tekun Niaga financing facility for the benefit of agro-food producers to address high production costs at the farm level.

“With the provision of the soft loans, it can help farmers and breeders to absorb the high operating and production costs, thus control the increase in chicken prices,“ he said.

Nanta explained that the issue of rising chicken prices which involved operating costs influenced by the world market was indeed very challenging and demanded the cooperation of the various ministries and agencies.

“Nevertheless, the KPDNHEP will continue to monitor the prices from time to time and we wish to assure that appropriate steps will be taken to safeguard the welfare of the consumers and traders,” he added.