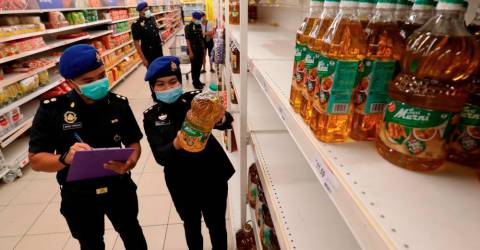 Jihad Against Inflation Task Force chairman Tan Sri Annuar Musa said the move was deemed necessary after discussions held with the industry to lower the price of cooking oil were proven ineffective despite the decline in crude palm oil prices.

“As the price of cooking oil was not lowered, the existing law enables us to gazette certain essential items with their maximum retail prices.

“The KPDNHEP (Ministry of Domestic Trade and Consumer Affairs) can take such an approach (gazetting) so that palm cooking oil will have its maximum retail price from time to time,” he told a press conference after chairing the task force’s meeting at Parliament building today.

Annuar said the setting of the maximum price is expected to be implemented in another week.

Annuar, who is Communications and Multimedia Minister, said the KPDNHEP will set the price based on adjustments to maintain a certain profit margin and ensure that excessive profit-taking will not occur.

Prior to this, the price of bottled cooking oil was expected to drop in line with the decline in the crude palm oil price from RM7,000 per tonne to RM3,600 per tonne this week.

Despite the call on manufacturers and retailers to lower the price of cooking oil in bottles, Annuar said the reduction of the price had been really slow.

Annuar said the government could not allow the industry to continue operating in an unregulated environment, especially after being given two weeks to lower their prices.

“This requires a sense of responsibility and togetherness. Price hike involving essential items is not a trivial matter. Cooking oil is as important as chicken, eggs and rice. That’s why price increase should not be done by achieving high profit margin,” he added. — Bernama