How a feisty 94-year-old grandmother’s complaint provoked Australia’s major toilet paper maker into action – so do you share her frustration?

A feisty grandmother’s complaints about a common problem with new toilet paper rolls has drawn the attention of a major Australian manufacturer.

With the help of her granddaughter Melissa, former factory worker Granny Daffy, 94, had reviewed toilet paper produced by company Kleenex on Facebook.

In one post she explained a major problem with the loo paper was that there was no easily accessible flap.

The internet sensation featured in the viral #bringbacktheflap video, where she pointed out that the flap was glued down and would waste too much loo paper.

‘It takes you nearly five minutes to undo the toilet roll,’ Ms Daffy complained as she demonstrated the difficulty of starting the roll.

The flap, Ms Daffy argues, is a vital component as it’s the first piece of paper on a new roll.

Ms Daffy gave the manufacturer a clear message: ‘Now Kleenex lift your game, because we can’t do without perfect toilet paper.’

The internet sensation (pictured) featured in the viral #bringbacktheflap video, where she pointed out that the flap was glued down and would waste too much loo paper

The viral video prompted an immediate response from Kimberly-Clarke Mill Manager Adam Carpenter who invited Ms Daffy to go and check out the facilities where Kleenex toilet paper is made.

On Thursday morning she took her first flight in 25 years to go visit the factory at Tantanoola in South Australia.

Ms Daffy was completely blown away by what goes on behind the scenes.

‘She couldn’t believe all the things that went into making toilet paper,’ Mr Carpenter said.

Her strong demands had definitely been heard, with Mr Carpenter adding ‘one thing we can guarantee, there will be a flap’. 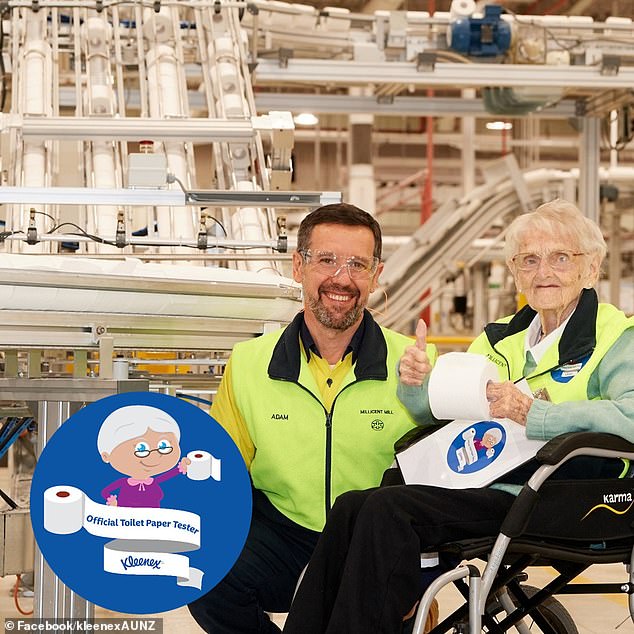 In a touching gesture, Ms Daffy (pictured) was made the first ever Kleenex ‘Official Toilet Paper Tester’

‘Who would have thought this morning that I was going to go talk about toilet paper,’ Ms Daffy said afterwards.

In a touching gesture, Ms Daffy was made the first ever Kleenex ‘Official Toilet Paper Tester’.