Special Chief Officer Cairn Newton-Evans ~(pictured above), 28, admitted he was too drunk to remember groping his fellow officers

A police chief who was an ambassador for the LGBT community has been sacked for touching the backsides of two male colleagues during a boozy work night out, but claimed he was ‘too drunk to remember’ the incident.

Special Chief Officer Cairn Newton-Evans who has won awards including the British Empire Medal for his work with LGBT communities – was quizzed after officers complained about his groping their backsides at an event in West Wales.

The 28-year-old faced a criminal investigation after two officers complained – and was handed a caution for sexual assault.

A misconduct hearing was told Newton-Evans offered his resignation before being formerly sacked for gross misconduct. 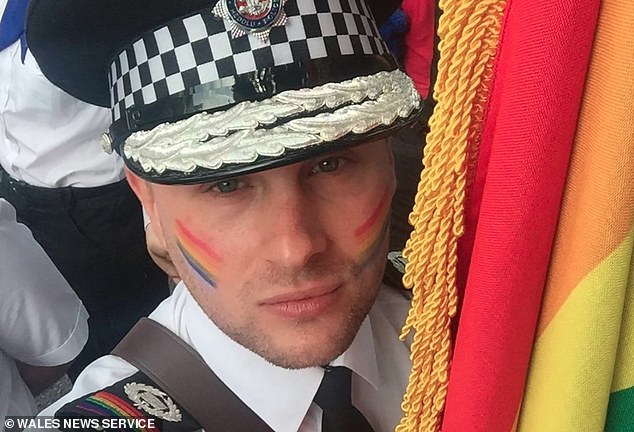 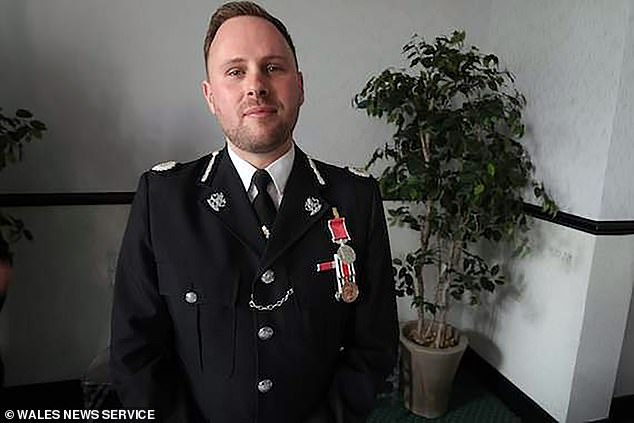 The disciplinary hearing was told Newton-Evans offered to write letters to both of the victims and he accepted his behaviour was unprofessional and unlawful.

A disciplinary hearing was told he was ‘too drunk to remember’ the staff night out in Carmarthen on November 8.

‘He was an ambassador for the LGBT community and profoundly regrets his actions.’

Newton-Evans previously told how he was inspired to join the police 10 years earlier after being a victim of a homophobic attack. 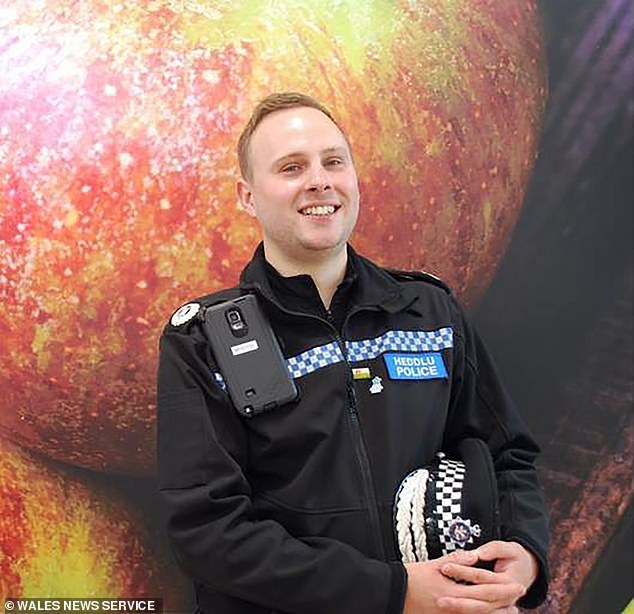 He said he wanted to change attitudes of his fellow officers towards LGBT communities.

Dyfed Powys Chief Constable Mark Collins said: ‘Cairn has given his time to Dyfed-Powys Police for many years and I am grateful for the work he has done.

‘However, as an organisation we will always strive to uphold standards of ethical and professional behaviour and where a representative of the force has done wrong, we will investigate and utilise the powers available to us, to ensure we maintain a workforce that continues to reflect the values by which we stand.

‘We will always listen to victims of crime and will act on what they tell us, conducting thorough investigations and acting upon those findings to ensure justice is delivered and is seen to be delivered.’

Newton-Evans represented the force at the National LGBT Police Conference – and told how he was inspired to join the police after suffering a homophobic attack.

At the time he said: ‘He grabbed me by the scruff of the neck, punching me repeatedly, screaming horrific things at me.

‘There was a death threat, there were homophobic remarks made.’

He said it happened in 2008 in his hometown of Ammanford, Carmarthenshire.

Newton-Evans added: ‘He punched me so many times and slammed my head into tarmac, my nose fractured and my cheekbone was displaced.’

The attack left him needing surgery to reset his nose.

He described four people watching it and making no attempt to intervene or call the police. He said only gave the attacker a ‘slap on the wrist’ and caution.

But he said an LGBT officer from his local station supported him and convinced him to try to ‘change things from within’.

Mr Newton-Evans joined Dyfed-Powys Police in 2009 and rose to the rank of chief officer of the special constable.