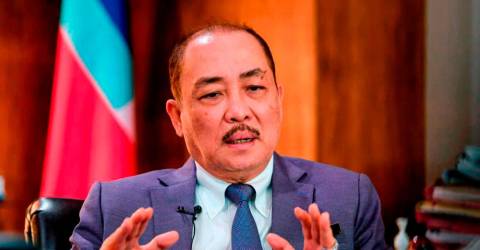 KOTA KINABALU: Gabungan Rakyat Sabah (GRS) has dismissed an allegation that the coalition has declared war against Sabah Barisan Nasional (BN), its partner in the state government.

GRS chairman Datuk Seri Hajiji Noor (pix) said GRS hoped that Sabah BN would continue to cooperate in administering the state, in line with the mandate given by the people in the 16th state election in 2020 to form the GRS-BN government.

He said that he and GRS had also campaigned for BN candidates in the just-concluded 15th General Election (GE15).

“We have no reason to declare war on BN,” the Sabah Chief Minister said in a statement today.

Yesterday, Sabah BN chairman Datuk Seri Bung Moktar Radin was reported as saying that GRS’ announcement of support for Perikatan Nasional (PN) chairman Tan Sri Muhyiddin Yassin to be appointed as the new Prime Minister had breached an agreement between the two coalitions and amounted to a declaration of war.

Hajiji said there was only an agreement for GRS to support UMNO and BN if the coalition was eligible to form the new government and nominate its leader to be Prime Minister after GE15.

“However, when BN lost and UMNO (leader) was not eligible to be Prime Minister, the agreement was automatically invalidated. It should be stressed that before GE15, no agreements were made with other people (parties), including Pakatan Harapan (PH),” he said.

He also denied allegations that he had brought an MP from Parti Kesejahteraan Demokratik Masyarakat (KDM) and two independent MPs to meet Muhyiddin at his residence in Kuala Lumpur.

“They met Tan Sri (Muhyiddin) on their own accord and I was not involved in the meeting at all,” he said.

However, the four individuals declined to comment on the meeting when contacted.

In GE15, GRS won six of the 13 parliamentary seats it contested, BN won seven of the 12 seats it vied for, while Bersatu vice-president Datuk Seri Dr Ronald Kiandee retained the Beluran seat on a PN ticket. – Bernama