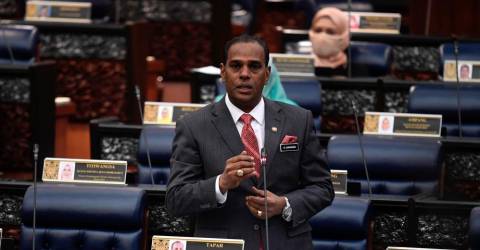 The argument triggered when Saravanan provided clarification on the Malaysian Anti-Corruption Commission’s (MACC) probe into the PenjanaKerjaya scheme over false claims and misappropriation of funds.

Saravanan stressed that he would not protect anybody involved in the alleged abuse, amid speculations that MIC members might be among those implicated.

“If I wanted to sweep everything under the carpet, I would have ordered Social Security Organisation (Socso) not to lodge a report to MACC,” he said, in response to earlier questions raised by lawmakers on PenjanaKerjaya.

M. Kula Segaran (Ipoh Barat-PH) then asked Saravanan if his remark implied that MIC members were involved in the scandal.

This then irked Saravanan, who responded by saying: “MIC members may be involved, but we are not sure yet. What we are sure of is that Bagan (Lim) has been charged in court over accusations of dishonestly misappropriating two plots of state land (as payment for the Penang undersea tunnel project). Don’t talk like an angel, Ipoh Barat. DAP has been proven to have been charged in court.”