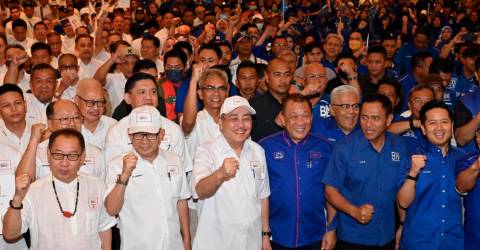 SANDAKAN: Chief Minister Datuk Seri Hajiji Noor has denied Parti Warisan’s (Warisan) allegation that the Sabah government is marginalising the Chinese community, especially in the administration of the state.

He said the state government led by Gabungan Rakyat Sabah (GRS) and Barisan Nasional (BN) really wanted to appoint individuals from the community as ministers in the state cabinet, but no Chinese candidates from the government parties won in the 16th Sabah State Election (PRN). held in 2020.

However, he said the state government had appointed two former Chief Ministers from among the Chinese community to hold important positions, namely Datuk Seri Yong Teck Lee as an appointed member of the State Legislative Assembly, and Tan Sri Chong Kah Kiat as the Chief Minister’s advisor for the tourism sector.

“But when the next state election comes, give support to Chinese leaders who will be candidates for GRS, we will give ministerial and assistant ministerial positions,“ he said at the “Ceramah Perdana Sandakan Ketua Menteri Bersama Rakyat “ event at Dewan Hakka Sandakan here last night.

Hajiji added that what should be prioritised right now was efforts to revive the economy and develop Sabah for the benefit of the people as a whole.

On Monday (Nov 14), Warisan president Datuk Seri Mohd Shafie Apdal in a ceramah (political speech) in Putatan questioned the efforts of the GRS-BN-led Sabah government to champion the plight of the Chinese when no one from that race was appointed as a minister in the state cabinet. – Bernama