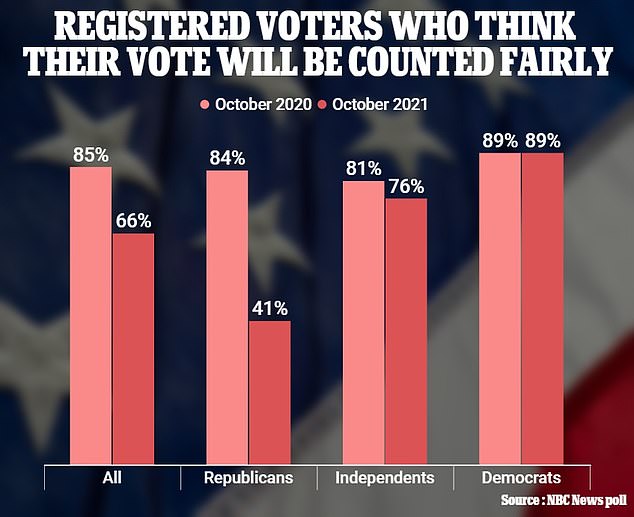 Just 22% of Republicans believe Biden was legitimately elected and HALF doubt their vote will be counted accurately, new poll finds


A new poll shows Republicans‘ confidence their vote will be counted accurately in future elections has dwindled to 5 in 10 as less than one-fourth of that demographic think Joe Biden was elected legitimately.

In an NBC News poll released Monday, 58 per cent of all registered voters said they believe Biden legitimately won the presidency in the 2020 election while 38 per cent say they feel that he did not.

When broken down by party, 22 per cent of Republicans say Biden was legitimately elected, while 71 per cent of independent voters feel the same way and a whopping 93 per cent of Democrats think Biden was the legitimate winner.

The by-party results are also reflected in how voters feel about whether their ballot will be counted fairly in U.S. elections.

Overall, 66 per cent of registered voters think their vote will be fairly counted in elections. Twenty-nine per cent say they are not confident that their vote will be counted accurately in the future, up from 11 per cent who said so in the same poll conducted October 2020.

Republicans’ confidence that their vote will be counted accurately in future elections has significantly dropped off since last year, a new poll found 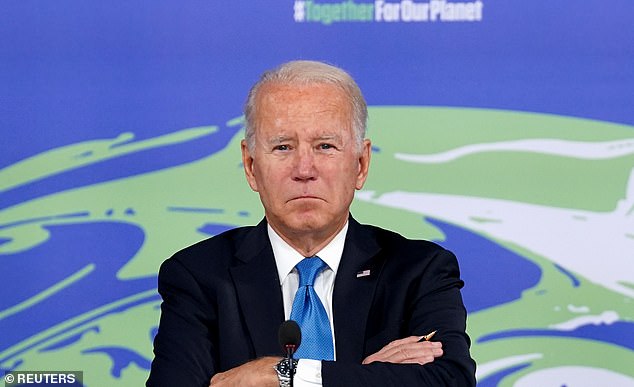 In the poll last year, 85 per cent of respondents said they felt their vote would be accurately counted.

The drop mainly comes from a huge Republican shift in the way they view elections after Donald Trump lost to Biden in 2020.

The former president began a rampage questioning the validity and integrity of U.S. elections, claiming the presidential contest was rigged by Democrats to boot him from the White House.

Trump’s base embraced these claims, which he still repeats at rallies.

Despite casting doubt on trust in the U.S. election system, Trump still encourages his voters to turn out to cast their ballots as Republicans are concerned the ex-president’s sentiments will discourage his base from participating.

On Monday, Trump told his supporters in Virginia to vote for Republican gubernatorial candidate Glenn Youngkin on Tuesday, who is running against Democrat Terry McAuliffe, who is backed by Biden and is a former governor of Virginia.

Trump stumped for Youngkin in a long distance tele-rally on Monday evening, in which the candidate did not participate.

Voters began heading to polling places on Tuesday morning as the race comes down to the wire with just a few tenths-of-points between them, according to recent polling. 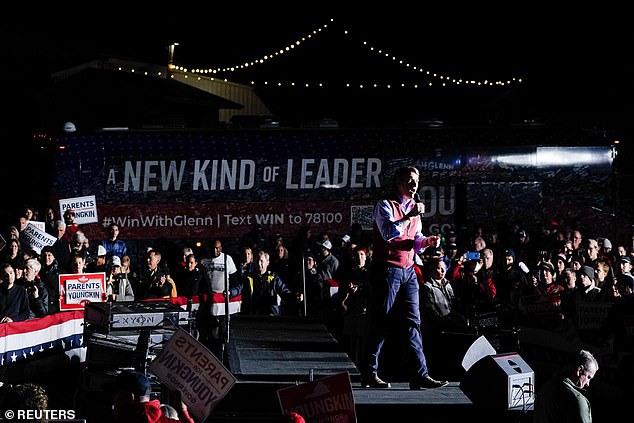 Only 50 per cent of Republican voters, shown rallying for GOP Virginia gubernatorial candidate Glenn Youngkin on Monday evening, believe their vote will be accurately counted in future elections. That’s down from 84 per cent who felts the same in an October 2020 poll 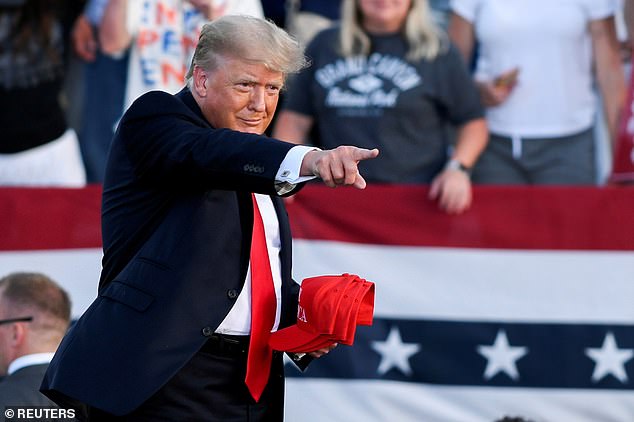 Former President Donald Trump has successfully cast doubt in his supporters’ minds that U.S. elections are not to be trusted as he repeatedly questions the integrity of the 2020 election, which he lost to Joe Biden

Even though Republicans’ confidence in elections is falling, they still turned out in much higher numbers to rally for Youngkin on Monday compared to the crowds that came out for McAuliffe.

In October 2020, 84 per cent of Republicans told NBC News polling that they believe their vote is accurately counted in elections. Now, only 41 per cent of this demographic feels the same way while 50 per cent say they do not think their vote will be counted accurately.

Democratic voters remained unchanged, staying steady at 89 per cent confidence in 2020 and in the poll conducted October 23-26 this year.

Among independent voters, 76 per cent say they think their vote will be counted accurately in future elections, which is down 5 per cent from the 81 per cent who said the same last year.