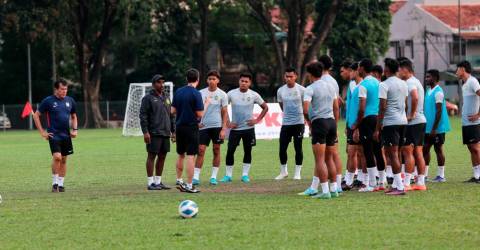 PETALING JAYA: National Under-23 football head coach E. Elavarasan has reminded his players to get used to a more aggressive style of play, just like the one inculcated in the senior squad.

He said that being juniors, it was crucial for them to learn to play that way because not only will it help them to shine but also pave the way for them to join the senior squad in the future.

“I feel that as young players, they must be aggressive in the first team. When you are aggressive in any position, it will give you the opportunity to make the senior squad.

“It’s the same everywhere, so we must prepare our players based on this concept,” he told reporters after the Under-23 team’s first centralised training session at the PKNS Sports Complex here yesterday, adding that this was also the style of play demanded by Harimau Malaya head coach Kim Pan Gon.

Elavarasan, who is also the assistant coach to Pan Gon, is confident that he will be able to prepare the squad for several tournaments next year.

The call-up for the centralised training yesterday is part of the Harimau Muda’s early preparation for a packed schedule of matches next season.

Among the tournaments the Harimau Muda will be competing in are the AFF Under-23 Championship in Phnom Penh, Cambodia; the 2022 Asian Games in Hangzhou, China; and the 2024 Under-23 AFC Asian Cup/Olympic Games Qualifiers. – Bernama