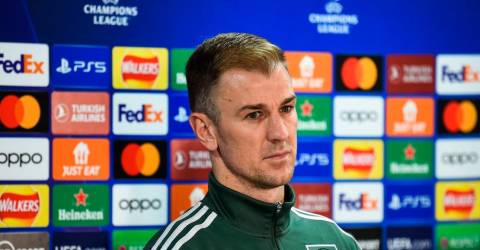 GLASGOW: Celtic goalkeeper Joe Hart believes his experience with Manchester City is a sign the Scottish champions could yet enjoy some success on the European stage.

The Glasgow giants, the first British team to win the then European Cup back in 1967, have already been eliminated from this season’s Champions League ahead of their penultimate match at home to Shakhtar Donetsk on Tuesday, but could still qualify for the knockout phase of the second-tier Europa League.

Celtic have recorded just one point from four European games so far this season but had chances to press ahead in all of them and had the better of a 1-1 draw against Ukrainian side Shakhtar in Warsaw.

Former England goalkeeper Hart was Manchester City’s regular number one during their early campaigns in the Champions League.

For all their Premier League triumphs, City have found European success much harder to come by, with the club finishing bottom of their Champions League group the season after their dramatic 2012 English title triumph, losing to Real Madrid, Borussia Dortmund and Ajax.

“I was at a club that had never been in it and we had a good domestic team but once you start entering this competition, (it’s) with squads, not teams,“ the 35-year-old Hart told a pre-match press conference on Monday.

“Celtic have a great European history. So the club belongs in the Champions League but the squad is coming up against squads of players that have been very used to the competition.

“There is no real secret, it’s just fine lines and fine margins and huge moments separate the game.

“I don’t think it’s been down to inexperience that we haven’t necessarily progressed.

“It’s just been moments that we haven’t seized and our opposition has managed to do that. But we are not far away.”

Celtic need to win on Tuesday to have any hope of staying in European competition beyond the World Cup break and they would also need to get something from a match against Real Madrid in the Bernabeu to make the Europa League.

“In the context of us continuing in Europe obviously it’s a must-win game,“ said Celtic manager Ange Postecoglou.

“Our ambition is to achieve that and keep us alive.”

He added: “It’s not just because I think we deserve something that you automatically get it or you feel like you are owed something.

“My thought process around this whole thing is that if you keep putting yourself in a position of playing the kind of football we want and creating chances then eventually you get the rewards.” – AFP