‘I’m not the one who needs it the most’: Harvard-bound student, 17, gives away $40,000 scholarship gifted by her high school for ‘excellence’ to help ‘someone who’s struggling’

Verda Tetteh, 17, received a $40,000 scholarship with her ‘General Excellence’ award from Fitchburgh High School in Massachusetts In a speech at graduation Tetteh announced she would not accept the money‘I am so very grateful for this, but I also know that I am not the one who needs this the most,’ the aspiring doctor said Tetteh had already received other scholarships covering her tuition at HarvardTetteh said her mom, Rosemary, was the inspiration for the unscripted gestureRosemary came from Ghana and received her degree from a community college at the age of 47 Fitchburgh High School principal said they will respect Tetteh’s wishes but haven’t worked out who will get the scholarship

By Christopher Eberhart For Dailymail.Com

Verda Tetteh, 17, was chosen by her peers to address her fellow Fitchburgh High School seniors at graduation last Friday, where she was gifted the ‘General Excellence’ award.

In an unprompted and heartwarming gesture, Tetteh announced that she would not be accepting the $40,000 scholarship that comes with the award – considered the school’s highest honor – after already having received several other scholarships to cover her tuition at Harvard.

‘I am so very grateful for this, but I also know that I am not the one who needs this the most,’ Tetteh said, dressed in a maroon cap and gown with the award in her hand.

‘I would be so very grateful if the administration would consider giving the “General Excellence” scholarship to someone who’s going to community college because I know I’m not the most in need of it.’

Scroll down for video.

Harvard-bound Verda Tetteh (pictured) announced she is giving away a $40,000 scholarship from Fitchburgh High School to ‘someone who’s struggling’ during a speech at graduation 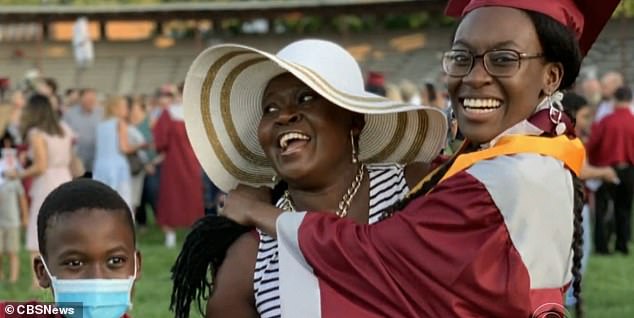 Tetteh hugs her mom Rosemary after the graduation. She said her mom is the inspiration for the charitable decision 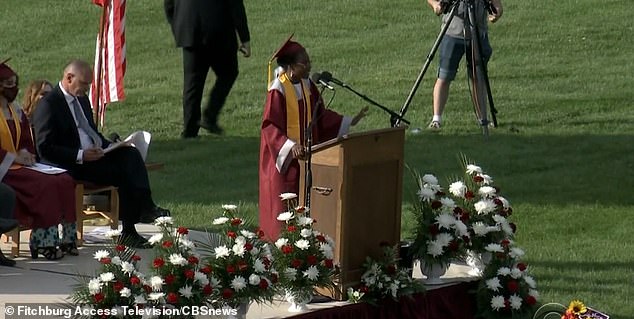 ‘I would be so very grateful if the administration would consider giving the “General Excellence” scholarship to someone who’s going to community college because I know I’m not the most in need of it,’ Tetteh said

The high-achieving senior is headed to Harvard on a pre-med track – which costs just shy of $200,000 for a four-year undergraduate degree – on a full ride, but the $40,000 Fitchburgh scholarship can be used for anything school-related; not just tuition.

Tetteh said the inspiration came from her mom, Rosemary, a Ghanaian immigrant who graduated from community college at the age of 47. Tetteh came to America with her mom as a child and started a student ambassador program.

The selfless act brought her classmates – many of whom are deemed ‘economically disadvantaged’ – to their feet for a standing ovation.

Leslie Barnor, Tetteh’s stepfather, said the family didn’t realize what was happening because the ovation was so loud, so people standing next to Tetteh’s family filled them in, the Washington Post reported.

Tetteh explained later that it was a split-second decision that her parents understood.

‘We are a Christian family,’ Barnor told the Washington Post. ‘We believe we don’t need to have so much before you give to others.’ 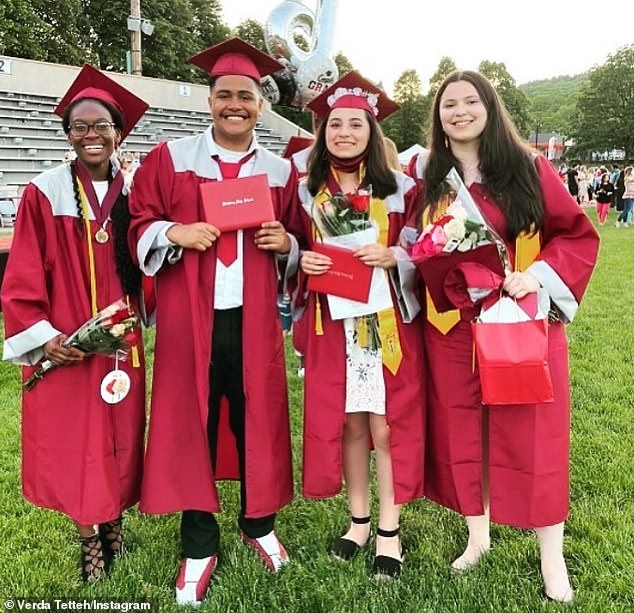 Tetteh surrounded by her friends after graduation 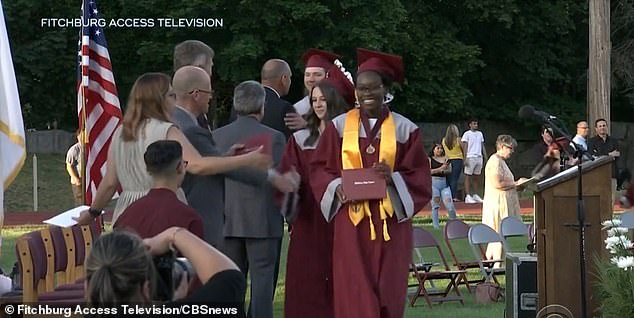 Tetteh receives her diploma from Fitchburg High School in Massachusetts 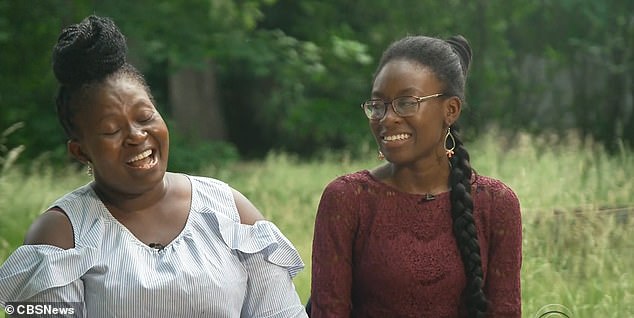 Tetteh’s mother Rosemary received her degree from a community college at the age of 47, inspiring her daughter to succeed

‘She represented the class and the school amazingly well, and I would even dare say, her generation.’

Roche said the school will honor Tetteh’s wishes for the money and plans to talk with her soon, but she’s has been busy with work, so who gets the scholarship hasn’t been worked out yet.