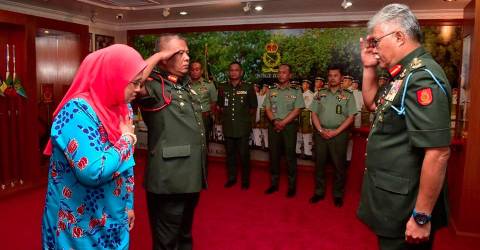 The First Division Headquarters Public Relations Cell in a statement said the handing-over of duties ceremony was held at the Muara Tuang Camp parade grounds in Kota Samarahan today.

Born on Oct 29 in Mersing, Johor, Hassan started his career in the army by undergoing training as a cadet officer in 1985 and was commissioned as a Second Lieutenant on Oct 4, 1986.

“During his almost 37 years in service, he had held important positions where before he was appointed as the First Division commander, he was director-general of Operations and Training at the Army Eastern Field Command headquarters.

Dzulkafli who was the First Division’s 28th commander who began holding the post on June 19, 2020 will be undergoing the transition training session before going on compulsory retirement in February 2023. – Bernama