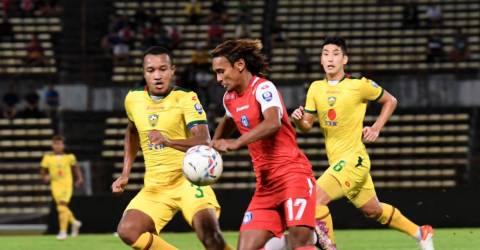 KUALA LUMPUR: Amri Yahyah notched a brilliant hat-trick to inspire Sabah FC to a 4-0 win over Kedah Darul Aman FC in their Super League match at the Likas Stadium in Sabah yesterday.

Sabah, under the guidance of coach Datuk Ong Kim Swee, scored all four goals in the second half, with Amri finding the net in the 51st, 61st and 72nd minutes while Park Tae Su chipped in with one from a free kick in the 56th minute.

It was a strange night indeed for Negeri Sembilan’s Herold Goulon, who netted all three goals.

After opening the scoring for Negeri Sembilan in the 47th minute, he turned villain by scoring an own goal in the 74th minute.

Fortunately for him, Herold managed to net the winning goal for Negeri Sembilan two minutes later.

Meanwhile, in the Premier League, home team PDRM FC went down 3-1 to Kelantan FC at the Kuala Lumpur Football Stadium in Cheras.

Although The Cops took a seventh-minute lead through Azrie Reza Zamri, Kelantan hit back with three goals in the second half through Nurshamil Ghani (49th minute) and Nixon Guylherme (68th, 85th minutes).

In TERENGGANU, Terengganu FC II and Selangor FC shared the spoils after drawing 0-0 at the Sultan Mizan Zainal Abidin Stadium in Kuala Terengganu.-Bernama