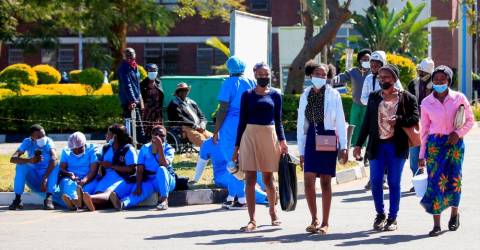 HARARE: Doctors, nurses and teachers across Zimbabwe went on strike Monday, as the country’s latest financial crisis has left their salaries almost worthless.

Nurses earn 18,000 Zimbabwe dollars per month, which is now worth only about US$55 at the official exchange rate.

Teachers do slightly better, at about $75 a month.

Health workers protested outside the offices of the Health Services Board, located in one of the country’s biggest hospitals, waving placards and singing.

Riot police were stationed within the facility, as patients lay unattended in corridors and outside the hospital.

“Our health services board, which is our employer, and the Ministry of Health have totally refused to talk to the health workers,“ said Zimbabwe Nurses Association head, Enock Dongo.

The government last week said it would double the salaries of all civil servants, but Dongo said no formal offer had been made.

“You don’t need to be told that the salary that you are receiving is not enough,“ said Dongo. “It is now clear that the members want to totally withdraw their labour.”

Teachers on Monday also called a five-day strike, according to a statement from the Amalgamated Rural Teachers Union of Zimbabwe.

“We cannot continue to be an embarrassment in our community as a result of the poverty that the government believes should remain as part of our working lives,“ the statement said.

Patients in Zimbabwe’s public hospitals already have to buy their own supplies to bring to the long-neglected wards.

“The hospital had even ordered us to buy gloves, bandages and paracetamol for my sister but now the nurses have gone,“ said one patient’s relative, who requested anonymity.

Runaway inflation in Zimbabwe topped 131 percent in May, reviving memories of hyperinflation seen more than a decade ago. Prices ran so out of control that the central bank in 2008 had issued 100-trillion-dollar note, which has now become a collectors’ item.

The government then ditched the local currency and adopted the US dollar and the South African rand as legal tender.

But in 2019 the government reintroduced the Zimbabwean dollar, which is already rapidly declining in value. – AFP