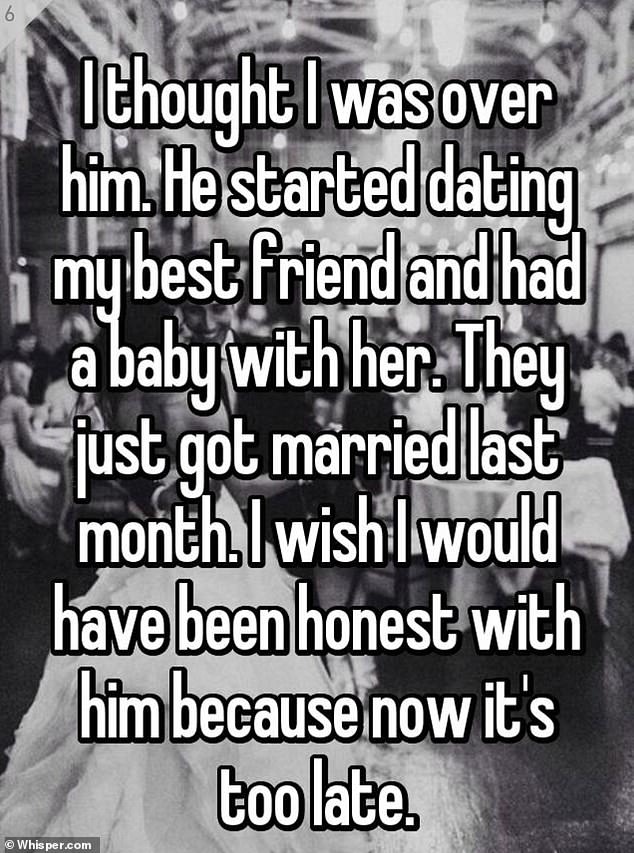 The end of a relationship is always difficult and painful, but the heartache is so much worse when you look back with regret and realise that an ex will forever be the ‘one who got away’.

People who wish their love lives had turned out differently took to the anonymous secrets sharing app Whisper to reveal their hidden heartbreak, including a woman whose ex married her best friend and had a baby with her.

Another is currently still best friends with her soul mate, but he doesn’t know she is still in love with him.

However, there was a cautionary tale from a woman who got back together with a man she thought she’d lost forever and now regrets it.

Here, FEMAIL reveals the cautionary tales of hearts left in tatters that will make you consider your romantic decisions extremely carefully.

This seems like the worst love triangle ever! I think it is time to move on for this person, he definitely already has 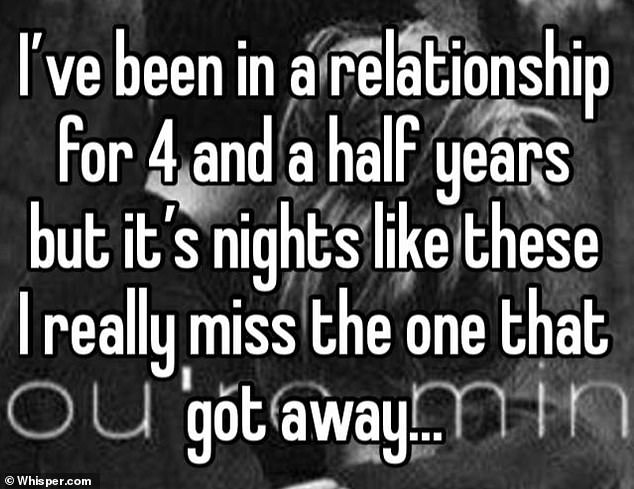 This person from Phoenix, Arizona, still got those deep feels even while in a relationship with someone else, ouch! 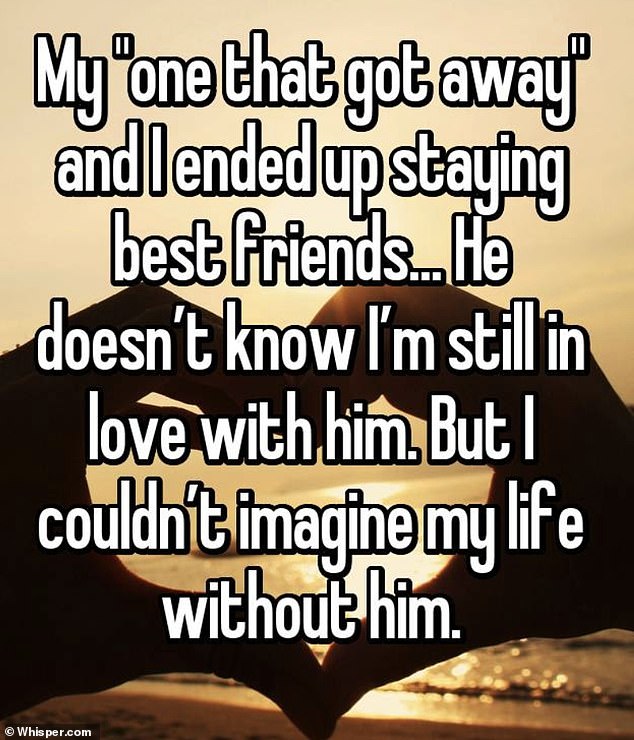 I think it’s time to tell him! This person has been majorly friend zoned in Colorado 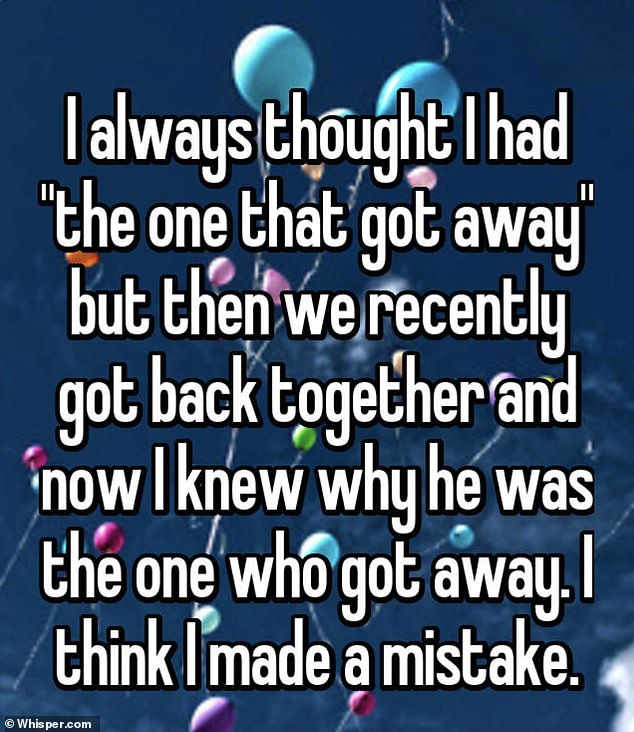 Ouch! You never know until you try and at least this person can move on knowing why it didn’t work out in the first place 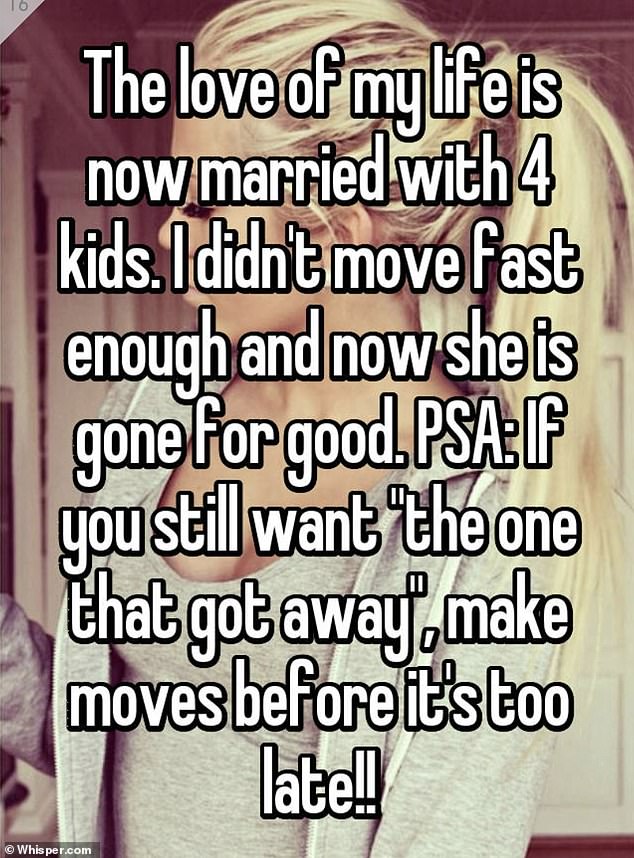 Wise words! A man revealed his regret after failing to act quickly enough to secure a relaitonship with ‘the love of his life’ 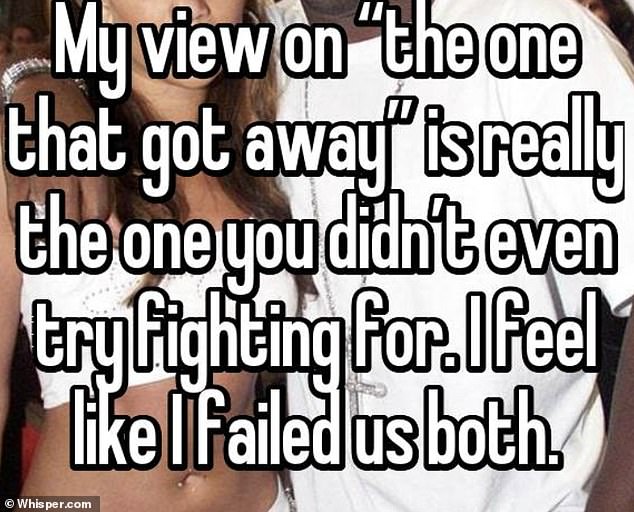 An individual from El Paso, Texas, took the blame for not fighting hard enough for their relationship, and 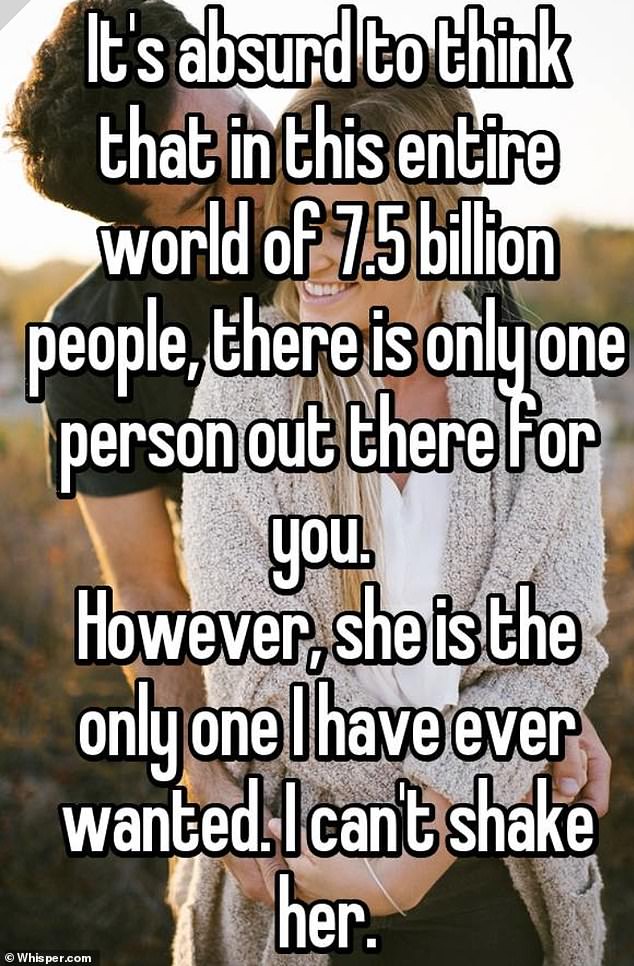 A man from Salt Lake City, Utah, said that despite there being more than seven billion people in the world, he is convinced that there is only one person for him, and they can’t be together 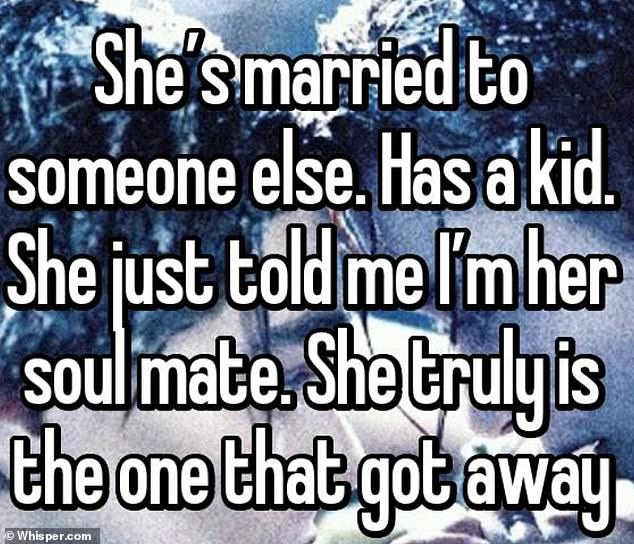 That stings! This person from Glasgow in Scotland is in a very sticky situation with a woman who loves him back, but has a husband and a child 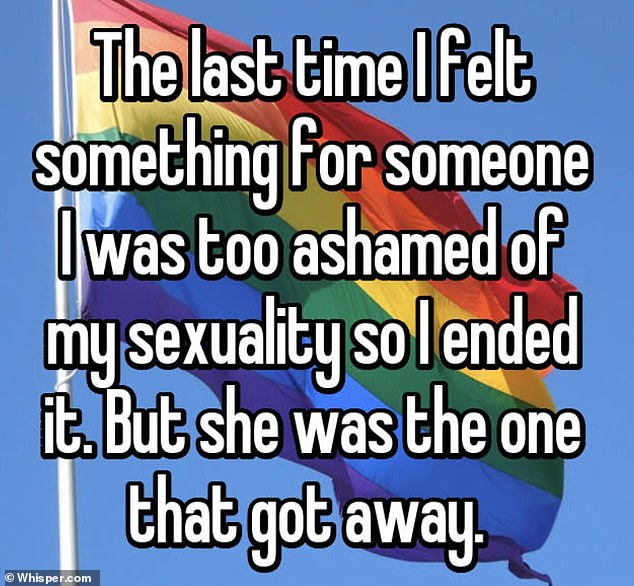 Is it too late? This person from Lakeview Gardens, Utah admitted that feeling ashamed of being a lesbian prevented them finding happiness 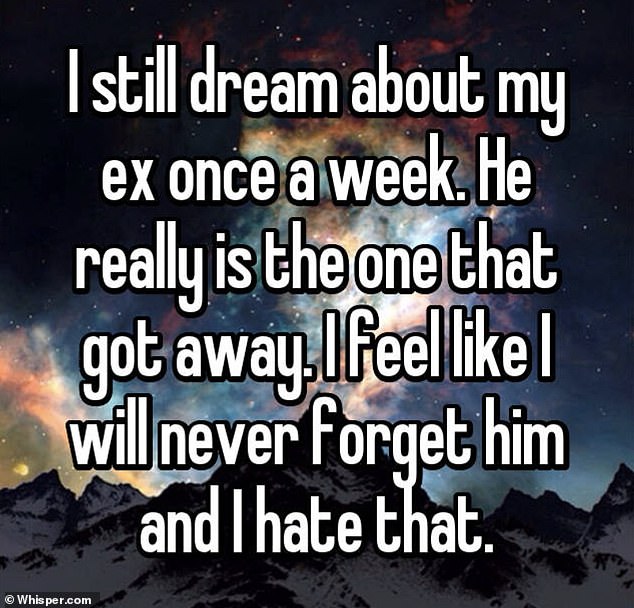 Get out of my head! One heartbroken individual revealed they can’t escape their ex, even in their dreams 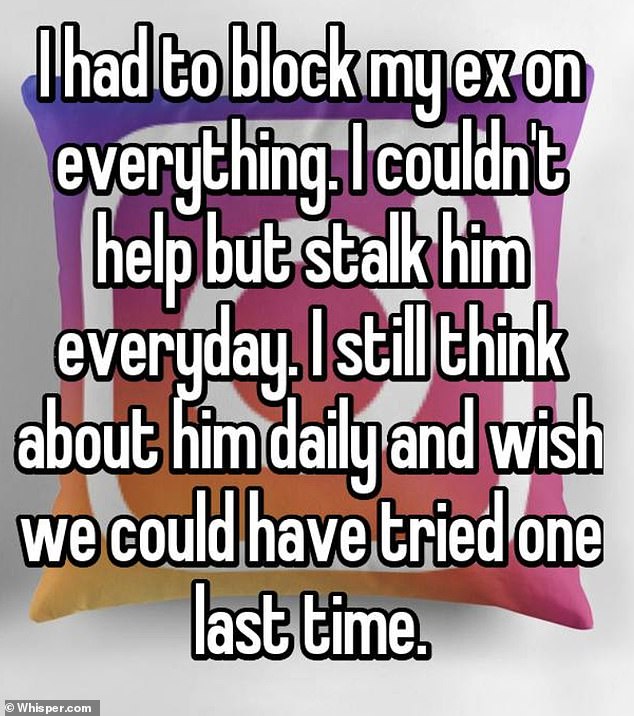 Great idea! If keeping your ex on your social media disturbs your inner peace, block them 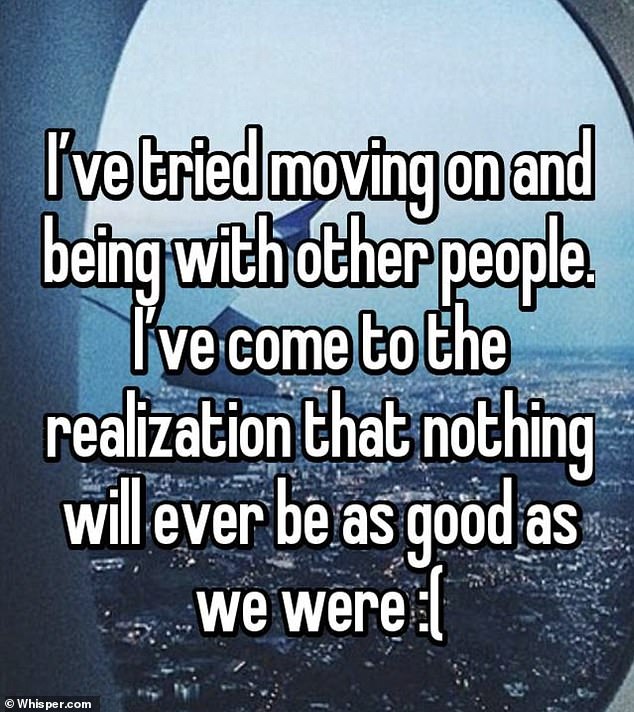 This person from Boston, Massachusetts has tried to move on  rather than pining for their ex, but to their dismay it hasn’t worked 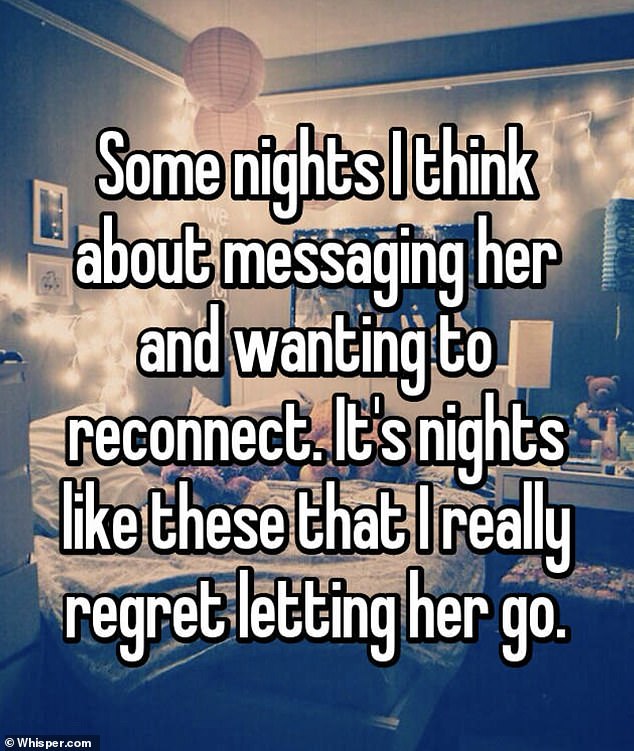 Insomnia! Those late night thoughts can really mess with your mind and make you feel all kinds of regret