Heavily-pregnant woman is among 20 migrants found in back of refrigerated lorry where they were living off coleslaw in 1C temperatures as police arrest man, 27, and 16-year-old boy

A heavily-pregnant woman was among 20 migrants found in the back of a refrigerated lorry where they had been living off coleslaw.

A worker at Wayne Walker in Stoke called police after hearing banging from inside the delivery truck.

Officers found the pregnant woman and she was taken to Royal Stoke University Hospital by paramedics.

A 16-year-old boy and a man, 27, were arrested on suspicion of illegal entry into the UK during the 8.15am incident on Thursday.

A worker at Wayne Walker in Stoke called police after hearing banging from inside the delivery truck. Sales director at Central Frozen Food Supplies (pictured) Nidal Mansour said the lorry got to the site at 7.30am after arriving from Germany

Sales director at Central Frozen Food Supplies Nidal Mansour said the lorry got to the site at 7.30am after arriving from Germany.

He said: ‘A staff member at Wayne Walker next door heard somebody banging from inside and wondered what it was. They didn’t open the door and rang the police.

‘When I was driving to work through Cobridge police cars were racing past me so I knew something was happening and when I got to work about six police cars were here and they opened the truck doors and there were two men and a pregnant woman inside.

‘The police just took them down and they had to search the rest of the lorry. They had been banging because they could tell the lorry had stopped and they wanted to get out.

‘When they saw the police they surrendered straight away as there was about 20 people around this truck.

‘They were refugees and police questioned the delivery driver. It was scary, this doesn’t happen in Stoke, it’s normally in somewhere like Dover, it’s something new for Stoke-on-Trent.’

Manager Theo Koulli said the temperature in the truck was just 1C. 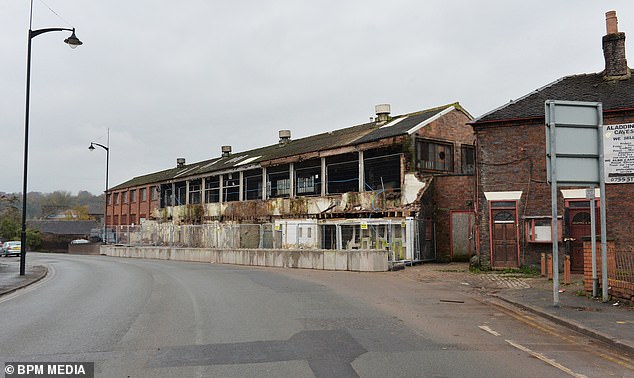 A Staffordshire Police spokesman said: ‘Officers were called to a report of people in a lorry on Davenport Street (pictured) in Longport at around 8.15am’

The 61-year-old said: ‘They questioned the driver for quite a while and officers stayed here for about four hours.

‘They had to examine the people and they didn’t speak English. We were two hours behind with our day because we had to stay with police and we had about seven wagons waiting to be unloaded.’

He added: ‘I felt sorry for the lady because she was so heavily pregnant and she felt she had to do that.

‘They were sat on mayonnaise in round tubs and there was a pallet with tubs of coleslaw on and they had been eating it so it had to be thrown away because it was contaminated.’

A Staffordshire Police spokesman said: ‘Officers were called to a report of people in a lorry on Davenport Street in Longport at around 8.15am (December 12).

‘Colleagues from West Midlands Ambulance Service attended to check two men and a woman who were found in a lorry. One woman was taken to hospital.

‘A 16-year-old boy and 27-year-old man were arrested on suspicion of illegal entry to UK. They remain in custody.’