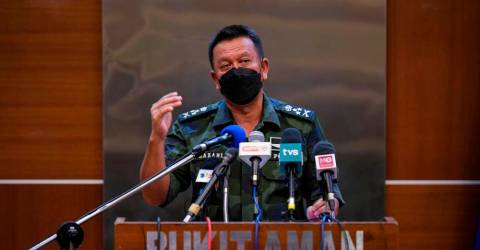 KUALA LUMPUR: Entry will only be for fully vaccinated fans as police step up security at the Bukit Jalil National Stadium here ahead of the Asian Cup (Group E) Qualifier matches between Bahrain against Bangladesh (kickoff: 5.15 pm) and Turkmenistan against Malaysia (kickoff: 9 pm) tomorrow (June 8).

Bukit Aman Department of Internal Security and Public Order director Datuk Seri Hazani Ghazali(pix) said ahead of the match, which was expected to be attended by a crowd of 85,000, police would also ensure that fans complied with the Standard Operating Procedures (SOP).

“As a security measure, body inspections will be done before and after entry to the stadium. Officers will also check bags carried by spectators and those who are not fully vaccinated will not be allowed to enter the stadium,“ he said in a statement today.

“Police will also tighten security at the upcoming match between Bangladesh against Turkmenistan and Malaysia against Bahrain, this Saturday (June 11).

He said spectators were not allowed to bring in prohibited items such as firecrackers, fireworks, flares, helmets, lasers, sharp objects, weapons, liquor and umbrellas and face stern action for violations.

“Police will ensure smooth traffic, whereby the public is advised to use public transport, avoid going through the streets around the stadium and follow police directions,“ he said.

“Road users are not allowed to park on road shoulders around the entrance and exit of the stadium and will face summons and towing for obstruction of traffic,“ he said.

“Fans are advised to wear face masks and avoid provocations at the match. For more information, contact Cheras police at 03-9205 0222 or any police station nearby,“ he said.-Bernama